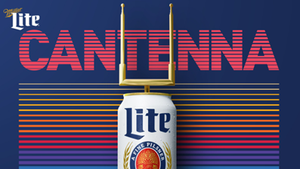 CHICAGO—On the list of strange things to happen in 2020, add Miller Lite coming out with a TV antenna as the latest entry. The beer company has announced what it calls the “Cantenna,” a reception device—and beer—that is designed specifically for cord-cutters or cord-nevers to receive broadcasts of NFL football games as an alternative to illegal streaming.

Miller Lite isn’t planning on officially entering into the antennas industry, however. The Cantenna is a promotional offer, similar to the “Cantroller” that Miller launched in 2019. Those 21 and older can enter into a sweepstakes between now and Oct. 12 to win their own Cantenna.