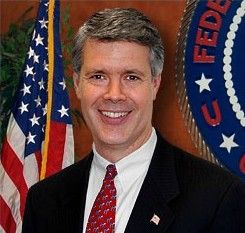 WASHINGTON: Robert McDowell’s renomination to the FCC became official yesterday. The president tapped the sole sitting Republican commissioner to serve on the FCC for five more years. He was initially appointed to the commission by former President George W. Bush in February of 2006. His current term expires at the end of this month.

McDowell came out of the telecommunications industry to sit on the commission under the chairmanship of Kevin Martin, whom the former often contradicted. Within months of his confirmation, McDowell recused himself from a vote on the merger of AT&T and BellSouth, even after Martin had the FCC’s chief counsel clear him for a vote. McDowell was expected to get in step with his fellow Republican and break a deadlock between them and the two Democrats on the commission. He forgot to fall in line.

“The American people… demand that public servants operate under the highest of ethical standards,” he said in a five-page response to being cleared to vote. “All too often, especially recently, they have been disappointed by those who hold public office. I hope this is one instance where they are not disappointed.”

He referred to the legal reasoning behind the clearance as “Swiss cheese,” rather than the “body armor” he was expecting. McDowell quickly earned the respect of Democrats and a reputation for independent thinking.

Acting FCC Chairman Michael Copps issued the following statement regarding McDowell’s nomination: “I congratulate my colleague and friend Rob McDowell on the announcement that President Obama intends to nominate him for another term at the FCC. I am truly delighted that he will continue on as a fellow commissioner. Since becoming acting chairman several months ago, I appreciate more than ever Rob’s collegiality, his openness, his creative intellect, and the deep sense of purpose he brings to his work. I especially want to thank him for all the talent and energy he has brought to our work on next week’s DTV transition. He has traveled near and far to help consumers prepare and he has done an outstanding job in helping us deploy an extensive DTV Call Center operation.

“I look forward to our continuing work together as we tackle the many tough communications issues confronting the commission and the country. Kudos to Rob and his wonderful family.”

NAB Executive Vice President Dennis Wharton, executive vice president of the National Association of Broadcasters had this to say about McDowell’s nomination:

“We have deep respect for Commissioner McDowell. His good humor and open-minded approach to issues facing the commission have served the public well, and we look forward to working with him during his second term.”

“Commissioner McDowell has brought to the FCC his extensive experience in the communications industry, a knowledge base that has benefited the nation as Commissioner McDowell made thoughtful policy decisions based on business experience and an understanding of the benefits of innovation to our country. A committed public servant, devoted father and genuinely nice person, Commissioner McDowell is the kind of government official who we all want representing our interests. We are pleased at the news of his re-nomination and urge speedy action to confirm his appointment.”

McDowell’s confirmation hearing is expected to be scheduled this month, along with that of Julius Genachowski, who’s been nominated to chair the commission. Reports also emerged this week that former Commerce Department executive Meredith Atwell Baker would receive the nod for the second GOP position on the commission. She would take the place left open by Deborah Taylor Tate, who exited the commission last December. -- Deborah D. McAdams