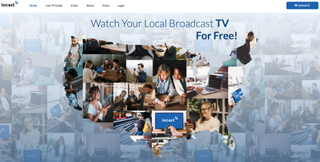 MINNEAPOLIS—Locast has planted its flag in the Twin Cities, announcing that the nonprofit local broadcast TV streaming service is now available for viewers in Minneapolis and St. Paul markets.

The legality of Locast, which is not paying any fees to share these local channels, is being challenged by major broadcasters ABC, CBS, Fox and NBC, though Locast founder and Chairman David Goodfriend remains confident that Locast is protected as a nonprofit under the Copyright Act of 1976.