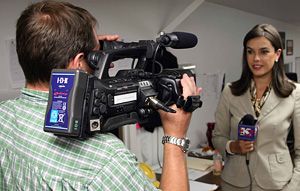 ABC-affiliate KTWO, serving central Wyoming, transitioned its local news to high definition this month with the help of JVC GY-HM700 camcorders. The station produces five newscasts every weekday and two on both Saturday and Sunday, plus a weekly sports program.

Moving to an all-HD newscast and a tapeless workflow were two very significant steps for the station, which is owned by Silverton Broadcasting Co. LLC and serves the Casper-Riverton market. According to Terry Lane, chief broadcast engineer, the station doesn’t have the budget of stations in larger markets, so the transition to HD news has been an economic challenge.

This spring, KWTO purchased 10 JVC GY-HM700 camcorders, most of which will be used for ENG work. Two have been designated as studio cameras.

Lane has been impressed with the image quality from the new cameras. “We haven’t had a problem with artifacts or glitches. The camcorders have even performed well in low-light conditions,” Lane said. “It’s amazing that this type of quality is available at such a reasonable price point.”

“Even adding a frame sync for each, they were a budget-friendly choice for our news studio,” he explained. “Eventually, we’ll add a third for roaming shots.”

KTWO has quickly embraced the benefits of JVC’s tapeless acquisition and the use of nonproprietary flash media. “We certainly reuse our SDHC cards,” he added, “but the technology is inexpensive enough that we can archive some cards without seriously impacting our operating budget. Our new JVC ENG cameras give us all the advantages of a tape-based system and all the advantages of tapeless workflow for our ENG work.”

The JVC camcorders also help in the KTWO edit suite, where news packages are cut using Apple Final Cut Pro. The GY-HM700 records natively in the .MOV file format, so there is no need to ingest or transcode footage.