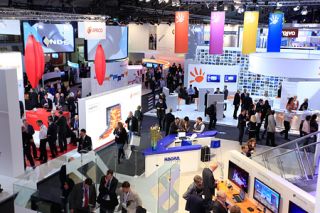 A record 49,911 attended IBC2011, up from 48,521 in 2010.
AMSTERDAM--Approximately 50,000 broadcasters from around the world flocked to IBC 2011 to take in the full range of the latest video production, distribution and display technologies. As the video and film communities hone and tweak their distribution and business models to adapt to the increasing demands of a media-hungry consumer market, exhibitors and conference keynoters discussed how they could better anticipate how to address those demands.

Although theater owners and consumer electronics companies have noted the recent dropoff in consumer interest in 3D, the world’s most famous advocate for the format is pushing ahead with his campaign to fulfill the demand for more content, both on-screen and in the living room. Making a surprise appearance at the Grass Valley press conference just prior to the show’s opening, Avatar director James Cameron and 3D camera developer Vince Pace announced a collaboration with Grass Valley and the CAMERON|Pace group, a company the two launched at NAB earlier this year. The goal is to bring a better 3D workflow to the broadcast arena, develop new products for the market, and advance and promote more efficient and effective production solutions in the live 3D sports and entertainment broadcasting areas, including a patented “5D’’ approach that allows 2D/3D capture from the same camera system.

"We have to have powerful alliances with people who are major players in broadcast in order to really be able to fulfill this future and supply the kind of quality 3D entertainment that people are going to demand," said James Cameron, Co-Chairman of CAMERON|PACE Group. "It's very exciting what we're going to be able to do together, in term of creating new products and integrating them into the workflows. We've been working together for a long time and this just formalizes the relationship."

3D advocates James Cameron and Vince Pace of the CAMERON|Pace Group were at IBC to campaign for better 3D production tools. Grass also announced its first new switcher in several years. The Karrera offers 1-2.5 M/E channels in a 4RU frame and 2-4.5 M/Es in an 8RU frame and targets markets in the mid-range, situated between the company’s Kayenne and Kayak switcher systems.

IBC IN THE CLOUD

While it may be a bit too early to determine whether broadcasters will embrace the “cloud” concept, exhibitors were eager to offer new services and tools for this new technique for IP-based production collaboration. Quantel, an early proponent of the technology, with the launch of its QTube production system last year, demonstrated multisite working by building a timeline of HD content held on servers at its headquarters in Newbury, U.K. and Amsterdam, and publishing the finished edit to the Amsterdam server at the RAI Convention Center. The resulting HD clip was then played out live in front of the audience on the Quantel stand. Front Porch Digital launched LYNX, a cloud-based media asset management system designed to offer next-generation storage and access from any device at any location.

Avid CEO Gary Greenfield reminded attendees that despite the fact that most of the gear on the exhibit floor was HD, the transition to hi-def was still in its infancy a decade on, and that only about 30 percent of the world’s broadcasters were transmitting in HD. Avid’s major announcement was the launch of an entirely new graphics system to replace its Pinnacle-based Deko platform. The Avid Motion Graphics system features an advanced real-time 2D/3D rendering engine using technology from Brainstorm Multimedia. A beta version was demonstrated in the company’s booth and is expected to be ready to ship by the 2012 NAB Show next April.

Sony took over Hall 12 with a massive exhibit space, which was continuously crowded. Naomi Clymer, vice president for Sony Europe, opened the show with the acknowledgement that the Japan earthquake and tsunami, which destroyed two of its manufacturing plants, had made 2011 “a difficult year” for the company. Sony showcased further developments to its F65 4K camera, which made a big splash at NAB. The company revealed that the camera will become available in January with a $65,000 price tag and also announced the launch of a complete production workflow for the F65.

NHK’s Super Hi Vision returned again this year with new content and a new Super Hi-Vision program production system, incorporating an eight-channel video switcher and slow motion equipment for live program production. It also displayed the world’s first 85-inch ultra-high-resolution (7680×4320 pixels) liquid crystal display and announced that it expected to partner with the BBC to broadcast next year’s London Summer Olympics in Super Hi-Vision. NHK is also hoping to accelerate the deployment of the format, moving the target date from 2020 to 2015.

Social media and the transition from linear television viewing to a nonlinear, ”television everywhere” concept was a hotly debated topic in the exhibition’s conferences. Speakers at the Future of Broadcasting summit debated the perception that traditional television was a dying market, with one BBC executive declaring that broadcasters were ”in the business of managing decline.”

But most agreed that the new era of multiple display screens in the form of smartphones, tablets and large screen displays was putting the consumer at the forefront of the media revolution and that broadcasters better respond, lest they be left behind. “Today it is the customer who is king,” said William H. Roedy, who was responsible for setting up MTV Networks International . ‘’We have to provide everything on all devices because that is what the customer wants.”