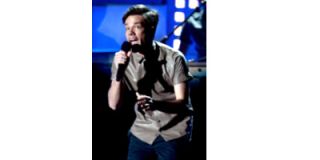 “I love using Shure PSM 1000 on all my shows, especially high profile shows like the Grammys,” said Michael Parker, one of the monitor engineers for the broadcast. “Excellent sound quality and solid RF are easily achieved when using the [PSM]1000s.”

Swift opened the show using Shure Axient Wireless (AXT200/Beta58) for “We Are Never Ever Getting Back Together.”

“It’s a tough environment for wireless inside the Staples Center and, honestly, anywhere in L.A. I couldn’t even get service on my cell phone. So, having a system like Axient with its frequency diversity is key,” said Cory Lorentz, artist relations manager for Shure, who added that this was the first year the product was used at the Grammys.

Mumford & Sons’ “Babel” won the Album of the Year Award, and they played twice, using wired Beta 58A microphones to perform “I Will Wait” and then with wireless (UR2/Beta 58) for the Levon Helm Tribute.

“That performance by fun. was ridiculous…a real highlight for me,” added Lorentz. “Some of the show’s production team might have been a little nervous because of all the water, but I wasn’t. We put all of our gear, including all of our wireless products through the ringer during quality testing. I knew the mics would hold up just fine.”

Dave Bellamy of Soundtronics, which coordinated RF for the broadcast, also had confidence in the microphones’ ability to withstand the challenges of fun.’s performance.