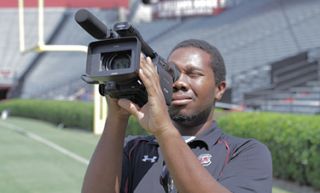 COLUMBIA, S.C.: The University of South Carolina Athletic Department is using Panasonic camcorders and production equipment to provide the coaches with footage of the football team’s—the Gamecocks—performance, as well as shooting the coaches’ show.

The Gamecocks’—which won the 2010 Southeastern Conference’s East championship—coaching and players accomplishments are being documented using AJ-HPX2700 P2 HD VariCam camcorders, and the same cameras are shooting the coaches’ show that, beginning August 28, will air Sundays on FOX Sports South.

In addition, the Athletic Department’s production arm, Gamecock Productions, will use two P2 HD VariCams to shoot coaches’ shows for men’s and women’s basketball and baseball.

Gamecocks’ football is also using four AG-HPX370 P2 HD shoulder-mounts for coaching analysis. Gamecocks Productions tried out the HPX370s in the months leading up to its purchase of Panasonic equipment last spring.

The HPX170s are used for diverse coverage of the university’s sports and support web streaming of a growing number of sports, including men’s and women’s soccer, volleyball and softball. The HPX2700s are also being deployed for marketing campaigns, intro videos for stadium and arena boards, and overall specialty and stylized shooting as well as for the coaches’ shows. The P2 Mobile will be used to record games from network TV trucks at home and away, and also as an ingest station.