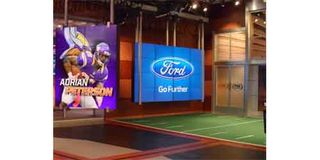 PHOENIX–Fox Sports Media Group studio is using a pair of Vista Systems’ Spyders in its Century City, Calif., location, where the NFL on Fox, UFC on Fox, College Football Saturday and soccer coverage are produced.

Two Spyder X20-1608 systems, with 16 channels in and 8 channels out, run parallel over 200 thin-bezel Sharp and NEC LCD displays, plus three rotated 103-inch plasma screens. The Spyders feed and route images to seven different monitor walls, which are arranged in a matrix configuration, with the largest a 12x5.

Fox is using the key-framing feature of the Spyders and is prebuilding sequences to display, and the switchers facilitate changing presets and scaling in the middle of a live show, the company says.

Fox chose the Spyders because of their 8-channel boxes, with a total of 16 channels each going, and also feature ease of operation and flexibility.