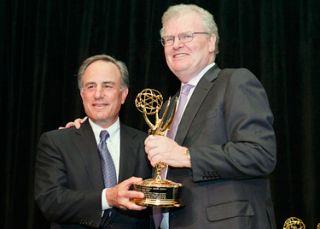 Advances in tapeless, intercom and audio for television technologies were among the fields honored at the annual National Academy of Television Arts and Sciences (NATAS) Technical Emmys at CES last week. The Emmy Awards for Outstanding Achievement in Engineering /Technical Development have been awarded since 1948.

The National Academy’s prestigious Lifetime Achievement Award in Technology and Engineering was presented to Sir Howard Stringer, Chairman and CEO of Sony Corporation. Sir Howard Stringer has been chairman of the company since 2005 and is one of the most respected executives in the communications industry.

Sir Howard Stringer, Chairman and CEO of Sony Corporation (R), accepts the Lifetime Achievement Award in Technology and Engineering from Verizon President/CEO Ivan Seidenberg, recipient of the 2009 award. The individuals and companies honored at the event include:

The awards were presented to an individual, company, or to a scientific or technical organization for developments and/or standardization involved in engineering technologies which either represent an extensive improvement on existing methods or are so innovative in nature that they materially have affected the transmission, recording, or reception of television.