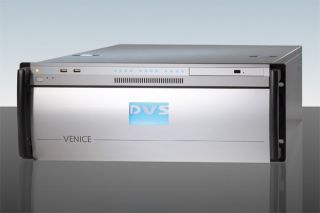 The newly equipped OB vans were especially busy during the summer. VENICE was responsible for the ingest of the recorded material at the 2012 UEFA European Football Championship, Tour de France and the 2012 London Games covered by the RTL “De Zomer Van 4” (“Summer of 4”) daily live sports show.

Thanks to its compact 4U chassis, VENICE requires little space and offers room for up to 8.4TB of fast and accessible internal storage, thus eliminating the need for additional storage in the OB vans.

VENICE expands on video server features, such as HD-SDI ingest and studio playout, to include intelligent file-based functions, such as file ingest, metadata editing, transforming, media transfer and distribution. VENICE serves as the central media production hub in the cramped, hectic environment of the OB vans.