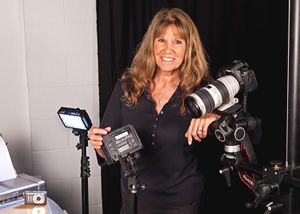 VAN NUYS, CALIF.: Litepanels said that Rhonda Dorsett, creative director and director of photography for the The Phoenix Group chose Litepanels fixtures to light interviews and footage surrounding a concert celebrating the works of Harry Chapin. Shot in Huntington, N.Y., the project marked the 30th anniversary of Chapin’s death.

“My partner shot stills at the concert and I did the interviews,” Dorsett said. “One of the most important was of Harry Chapin’s mother and his daughter, at Mrs. Chapin’s brownstone in New York.

“In order to do this shoot, we had to have a very compact gear bag and lighting system, because New York apartments are not known for their tremendous size and old brownstones don’t usually have great power sources. It was a small, dark place and not easily lit. And there wasn’t room to set up traditional tripods and lighting. We wanted to do a two-camera shoot, for easy editing. I brought our equipment in with the Petrol Cambio bag; three camera bodies, five lenses, batteries, chargers, filters, and our lighting workhorse--Litepanels MicroPros.

The Harry Chapin Tribute, shot for the Harry Chapin Foundation, is now in post production and will be seen on the foundation website and other venues later this year.