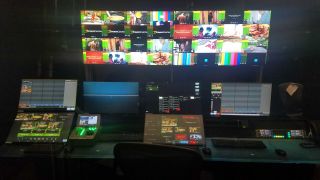 Launched at NAB 2019, Evertz’ BRAVO is an application on the DreamCatcher architecture that allows producers to maximize live broadcast revenues and capitalize on rights by creating top tier live content at lower cost and for multiple platforms. Ideally suited to live sports, gaming and entertainment programming, BRAVO provides all the features required for a multicamera production, including video/audio mixing, dynamic graphics, support for external graphic engines, replays and highlights. By acting as a software client on the DreamCatcher Playout node and leveraging DreamCatcher’s patented network architecture, BRAVO has access to all inputs and can be used on any production, regardless of its size or scale. Its intuitive, touch surface interface uses Evertz’ VUE technology and can be customized for one, two or more operators, giving them the controls they require to tackle a wide range of production tasks.

Discovery was quick to spot the potential of Evertz’ new BRAVO technology and became the lead customer to deploy the Dreamcatcher and BRAVO solution. Rob Goldheim, Discovery’s Group vice president of Production Engineering, says BRAVO’s arrival on the market coincided fortuitously with the broadcaster’s plans to launch the Food Network Kitchen app, which went on air in October 2019.

Goldheim says the main production challenge was delivering a large number of live events without dramatically increasing staffing levels. The system chosen had to be reliable, cost effective and collaborative, while also meeting the stringent quality requirements that Discovery demands of all its programme content.

“From the outset, the concept was to create an app-based cooking show that was outside the normal cable TV food show offering,” he explains. “Live events were key and Food Network Kitchen was planning to do a lot of them. Having a production control room filled with people for every one of these live events would have been totally cost prohibitive as it would have meant staffing across multiple shifts and getting people in and out between each production. This is why we turned to the DreamCatcher BRAVO. By adding DreamCatcher and BRAVO functionality, we are able to manage any number of live events with very small crews—usually just one TV producer and an engineer. DreamCatcher and BRAVO have brought a new dimension to Discovery’s approach to live programming.”

Using BRAVO gave Discovery’s production staff a whole set of useful new tools. According to Christian Jacobs, director of Engineering at Discovery’s New York office, favorites include keyable graphics that can be run by a single operator, the ability to easily bring in pre-recorded clips and files to supplement the live action and the ability to quickly choose audio inputs so that microphones can be switched by simply touching a computer screen.

“Food Network Kitchen’s requirements were not defined very early on, so we needed a Swiss Army knife solution that could do pretty much anything,” Rob Goldheim says. “The clip player, for example, not only records clips but also rolls clips as well, which we anticipated would be a big part of the Food Network Kitchen’s ask. There is also a metadata piece that we are still trying to define because there is a lot of interest in this. It will eventually tag live events for more integrated Alexa control and help identify ingredients, kitchen equipment and the various steps for each recipe. There’s a lot we still haven’t tapped into, and we are developing the tool sets behind our app to allow us to do more.”

“Working with Discovery on the Food Network Kitchen project has been a great experience, as the application was a perfect fit for BRAVO. The goal for BRAVO has always been to allow media companies like Discovery [to] tell great stories and create high quality content across multiple platforms. We are excited to be adding more advanced features to the BRAVO workflow to enhance the user experience on the streaming service. These features include intelligent automatic framing for 9x16 pan and scan as well as insertion of advanced metadata to allow user step through the content using Alexa,” says Vince Silvestri, vice president of Software Systems at Evertz.

Food Network Kitchen’s plan was always to incorporate more remote filming, but when the COVID-19 pandemic hit, this had to happen a lot faster.

Initially chosen because it allows Discovery to deliver more live shows efficiently, BRAVO really demonstrated its value with its flexibility, ease of use and scalability, and it enabled the broadcaster to continue streaming live programming on the Food Network Kitchen app, despite its talent and production teams being in lockdown.

“When COVID-19 hit, our only option was to film live segments remotely from the chefs’ home kitchens, which were located all over the USA,” says Christian Jacobs. “The combination of BRAVO and DreamCatcher has been a real asset because the system allows us to make production tools accessible remotely. As a result, we have been able to produce new, live content on the Food Network Kitchen app, which is something many other apps and networks have struggled with.”

“When we went into lockdown, live production was halted for approximately three weeks and the app replayed previously recorded content,” Jacobs says. “We used that time to work out what we were going to do. We just had to deal with it. From 70 live events a week, we went down to none, although we have now picked up again to about 40.”

The solution, according to Rob Goldheim, involved sending various Food Network talent— from A-listers to up and coming chefs on social media networks—a basic kit incorporating a couple of iPhones, a tripod and some simple production equipment. Discovery also partnered with a cellular transmissions company to transmit video feeds via its app to Food Network Kitchen’s production crew.

“We sent kits to talent all over the USA and then spent a couple of weeks working with them to make sure they knew how to use the equipment,” Jacobs says. “Obviously, we couldn’t send a cameraman to each location, so each person had to rely on a family member or significant other to film them while they cooked. It was nerve-wracking, but we kept it simple because we were relying on people who are not production experts to produce live content for us.”

Having good internet was also key as a poor connection could cause dropouts in the picture. “With a stable internet connection, the footage was broadcast quality,” Jacobs says. “The signal we received from the iPhones was compressed full-res 1080i 59.94 resolution, but was good quality and was decoded as baseband video. We have used the footage for linear promotions domestically and Food Network Kitchen intends to use the content on linear channels internationally.”

“It is fantastic that the technology existed to make this work,” he says. “There were certainly things that had to be ironed out, but we managed to solve most issues to the satisfaction of Discovery leadership.”

Rob Goldheim adds that having access to DreamCatcher and BRAVO during this critical period was crucial. During the early stages of COVID-19, Evertz introduced a key new feature on the DreamCatcher called “DC Anywhere” that enabled full low-latency remote access and control from any location with an IP connection.

“Without it, we would have needed many more crew,” he says. “The real benefit is the ability to do everything remotely because the system is software based and operationally all you need is a touchscreen. During the COVID-19 lockdown, operators connected to a VPN and remotely accessed Discovery’s BRAVO stations so they could work from any location, which was a huge win.”

“Our partnership with Evertz goes back many years, and we have a very good relationship” says Goldheim. “We worked closely in 2016 with Evertz to install and globally roll out a cloud-based Linear playout solution, so we had a high level of confidence in the company to deliver this solution. Our requirements may initially be unique to Discovery, but what we build together tends to develop into something that is ultimately useful for everybody.”

“Having worked with the group from Discovery for many years, we know that flexibility, reliability and ability to adapt quickly to changing environments is an absolute must. Utilizing an IP-based SMPTE ST 2110 infrastructure with MAGNUM Orchestration and Control, Evertz VUE Technology and incorporating evEDGE and 570ITXE’s along with the DreamCatcher and BRAVO solutions gives Discovery a very flexible and powerful platform to move forward,” says Melissa Davis, Evertz director of sales, Washington, D.C.