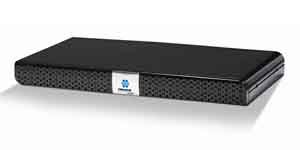 PC software offers access and control of Christie Phoenix streams anywhere a user can connect to their network. As a network streaming device, Christie Phoenix nodes are compatible with the majority of existing network cameras and surveillance systems, as well as a number of third-party video encoders.

The Christie Phoenix node is a 19-inch rack-mount unit that comes standard with DVI, KVM, and audio input and output connectors, all which can be used simultaneously. A Christie Phoenix node can encode up to two and decode up to 12 high-definition signals. Multiple Christie Phoenix nodes can be combined and synchronized to create a display wall of up to 128 outputs. Inputs, each up to 1920 x1080 pixel resolution, are encoded and placed on the network – while simultaneously allowing keyboard and mouse control of those inputs over the network. Where access to output connectors is not possible, Christie Phoenix offers software-only VNC and RDP implementations for direct access to encode, stream, control and display content.