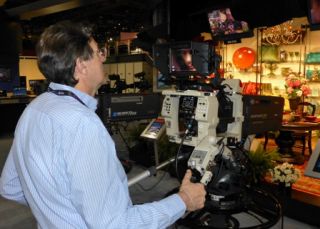 Blackmagic Design debuted its Cinema Camera, sporting a 2.5K image sensor with 13 stops of dynamic range and a built-in SSD recorder that can record in uncompressed RAW and compressed file formats. It mounts EF and ZE mount lenses, and features anLCD touchscreen monitor on the rear.

Ruben Centineo of TV Azteca in Mexico gets a feel for the Ikegami HDK-97C camera in its studio/sports configuration.

CameraCorps unveiled its Q-Ball Pre-Set, the latest version of its Q-Ball compact, remotely controlled pan/tilt/zoom HD/SD camera system. It allows 18 shot settings to be stored prior to a live or real-time recorded shoot.

HitachiKokusai Electric America introduced its SK-HD1500 HDTV high-speed camera system, which provides up to 180fps imaging for slow-motion replay. It has the form factor and all the features of Hitachi’s SK-HD1000 series cameras and can be used for live game action while capturing the higher frame rate.

Indiecam GmbH unveiled the IndieGS2K, a miniature CMOS global shutter camera incorporating a high-grade 2/3-inch CMOS imager to deliver up to 60 frames of 2K footage in 10-bit uncompressed and 12-bit RAW. The camera has a C-mount with adjustable back-focus that allows the choice of a wide range of high-resolution lenses.

Panasonic showed a 4K Varicam concept camera, providing few details, but seeking feedback from end-users. The company did lay out a workflow for the camera, which will record with AVC-Ultra 4:4:4. Panasonic also introduced the AG-HPX600 P2 HD camcorder, and the MicroP2 card series.

Sony showed its F65 8K camera, with the announcement that the company has delivered over 100 units with a large backlog of orders. New this year is the NEX-FS700, capable of slow motion up to 240fps at full resolution on a Super 35mm sensor. Coming is 4K capability with firmware upgrade and recorder.

For-A introduced its VFC-7000 HD Variable Frame Rate (Super Slow Motion) Camera, providing full 1280x720 imaging at up to 700 fps. It features a high-speed shutter operable at up to 1/200,000 of a second to reduce blur from fast-moving subjects.

I-MOVIX showed its X10 live ultra-motion system, which allows a live, on-going scene to be delivered in full HD resolution at a 10-times slow-motion factor. The I-MOVIX camera is interfaced with an EVS XT3 production server, which can provide up to 8 hours of continuous slow-motion playback.

P+STechnik showcased its PS-CAM X35 all-purpose motion-effect camera, designed for normal frame rates and slow motion up to 450fps. It can provide fast-motion, slow-motion and ramped-motion image capture in full HD. Output is via two HD-SDI ports, switchable between 1.5G and 3G.

Weisscam presented its T-1 camera, with the ability to exchange 16mm sensor platforms, which allows owners to upgrade the camera as new sensors become available. The T-1 provides normal and high-speed frame-rates and uncompressed output in HD and RAW. It is compatible with 16mm film lenses.

3ality Technica showcased IntelleCal, a self-calibrating geometry harmonizer that automatically aligns tow cameras on a 3D system at the push of a button.