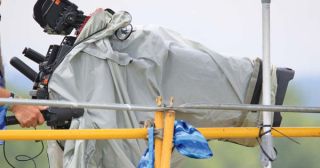 Broadcasters should review their situations and determine the risk of the environment that the assembly will be exposed to, then select appropriate cables and connectors that reduce the risk. (Image credit: Bob Kovacs)

As stories about severe weather make headlines, the question arises about how to deal with cables that have been deployed that are now exposed to the elements.

“Water and electrical signals are not the best of friends,” said Steve Lampen, an industry consultant who spent a career as a product line manager for Belden and author of the book “The Audio-Video Cable Installer’s Pocket Guide.” “Some might think they are mortal enemies, but there are lots of cables that work perfectly well in water. Some of those are just dumb luck, while others have [water resistance] added in the design and manufacturing.”

Lampen said that a little rain falling on cable is not usually a problem.

“It can get wet in a storm, but will dry out soon after,” he said. “Almost any cable with a plastic jacket can withstand this wet/dry cycle. Of greater consideration in this case is the jacket of the cable, which should be black. Black cable uses ‘carbon black’ as the additive to give it the color, and this material is very good under ultraviolet light, such as sunlight. Any other color can crack and break over time, and allow water inside.”

In addition to using carbon black, Lampen said that the type of material makes a difference for weather resistance.

“Polyvinyl chloride [PVC] is soft and not very water-resistant, although I have heard stories of gray PVC cables underwater lasting more than 50 years,” he said. “A better jacket is polyethylene [PE]. If you can get hard black PE, it is the best plastic at resisting water.”

There is a serious consideration about using PE-jacketed cable, however, since it’s flammable.

“Hard black polyethylene would work great outside and last for many years, but it would not meet any fire code inside,” Lampen said. “If you want riser- or plenum-rated cables, those will most probably not have PE jackets. That being said, there are recently upgraded cables that have indoor/outdoor jackets that meet fire ratings, and yet have good ruggedness for outdoor applications.”

So if you need to roll a production van up to a shoot and deploy cables, getting some rain on them is probably not a disaster if you care for them properly. A bigger concern is when cables are immersed in water for extended times.

“Real problems begin in standing water such as a pool, fountain, ocean or anywhere the cable will not dry out,” Lampen said. “One other place you will see standing water is in conduit. Once conduit fills with water, it is very hard to empty it. Although many designers and architects think conduit is how you ‘protect’ cables, they are sadly mistaken as these cables can fail in only a few months. Pulling them out and reinstalling them does nothing to solve the problem. And, although you can blow the water out of a conduit, the more important question is, how did the water get in there? More than likely, the water will come back in and your new cables will be in standing water yet again!”

Many installers automatically recommend “direct burial” cable for outdoor installations. In many instances, all that needs to be done is to dig a trench and lay in the cable.

“As long as the cable can resist the sharp edges of stones and dirt, you’re good to go,” Lampen said. “When the cable gets wet, most soil will allow the water to pass and the cable to dry out.

“Even direct burial cable comes in variations depending on your application [and wallet],” he continued. “The simplest uses dry water-blocking—this is a layer put inside the cable that looks like a layer of fabric. If there’s a hole in the jacket and water gets to this layer, the material swells up, filling the hole and preventing more water from coming in. Many of these cables have PVC jackets that are not very strong, but if you put a layer of sand below and above the cable, that will reduce the impact on the cable and increase its useable life.”

There is much more that could be said about cable and its ability to withstand environmental assaults, but another factor affecting the performance of cable is how it is terminated. In other words, the connectors on the ends of cables play a major role in how cables function in wet conditions.

At least one manufacturer suggests that wet cables and connectors might be reused if carefully checked.

“If connectors are not sealed you would want to dry the connectors and cables out,” said Steve Cooper, vice president of engineering at Switchcraft. “After checking insulation resistance between conductors, if the insulation resistance is above 100 Megohms, it is probably OK to reuse the connectors and cables before deciding to throw them out. If contact resistance of mated connectors is reading higher than expected you probably want to discard. If they are sealed to IP67 or IP68, they have a better chance of being reuseable.”

Cooper noted that this is the case with cables that carry the typical low-voltage signals used in the television industry. A cable carrying higher voltages should be checked more thoroughly or replaced.

Using the best connector for the job is always smart. Broadcasters should review their situations and determine the risk of the environment that the assembly will be exposed to, then select appropriate cables and connectors that would reduce the risk, Cooper said. These include non-sealed connectors, as well as connectors sealed to IP67, IP68 or IP69K.

Other specialists agree with the practice of selecting the correct connector for the expected (and even unexpected) conditions.

Röllin pointed out that Neutrik has fiber connectors rated to IP67 in mated condition, which is tested by immersion in 1.2m of water for more than 30 minutes.

“Storms and harsh weather conditions are challenging for productions all over the globe,” Röllin said. “I strongly recommend the choice of products and solutions that are truly specified for these challenging applications. Only then you will save time and avoid potentially catastrophic situations during your productions.”

Still, the connector is probably the weakest link in the chain when it comes to preventing unexpected ingress of water.

“Connectors are one of the most difficult parts of this puzzle,” Lampen said. “First, the cable is cut just to put them on. Second, the nature of a connector is to open things up and make connections. There certainly are water-resistant connectors, but finding one for each water-blocked cable is not an easy task.

“One might assume that all the connections are made above ground, where they can be protected, but that is not always possible, especially with very long cables, more than 1,000 ft. (304m),” Lampen continued. “Now you can order long cable runs from a manufacturer [to minimize the chance that a connection will be in an undesirable location.]”

Lampen detailed the importance of the metals used in connectors, and explained the options.

“Commonly, you have a choice of nickel, silver or gold,” he said. “These are just a layer on the pin which might be brass. Nickel, of course, is the cheapest and has reasonable corrosion-resistance. Silver, on the other hand, has the lowest resistance—if you plug these connectors together and never unplug them again, then silver is the best choice. If you unplug them, move them around, and plug them back in (or leave them unplugged for a while), silver is not so good. Silver corrodes or tarnishes, which is why are forever cleaning real silver flatware or coffee pots to get the tarnish off.

But silver oxide (tarnish) is the same conductivity as regular silver so what’s the problem?

The problem, according to Lampen, is that the tarnish adds a layer on the outside of the object; in other word it changes the dimensions of everything.

“A silver pin that is oxidized is very slightly wider than it is in an unoxidized state. Where the atmosphere around these connectors has a lot of water vapor [and other contaminants], the oxidation will increase, with thicker layers, more quickly created. Eventually, these connectors will have intermittent connection points because the dimensions of the pins and jacks has changed so much.”

The ultimate connector metal is gold, Lampen said. Gold does not oxidize and has good electrical characteristics (although not as good as silver). For cable that offers the most protection from water damage, Lampen recommends gel-filled cable. If cables and connectors have been flooded with water, the general recommendation is to discard it all and start from scratch.

“It’s a crapshoot about using them again,” Lampen said.

The bottom line is that adding water to cable and connectors is a recipe for failure. “There is no cable or connector that is truly water-proof,” Lampen said. “Every cable and connector will eventually fail—it might take years or decades, but it will fail. If people are walking on these cables, even for one weekend, I would be hesitant about reusing them. Occasional wet/dry applications are a lot easier than standing water.”

Lampen mentioned a major flood in a large city that put an outdoor display and sound system underwater for weeks. The city sued the manufacturers but lost, as there was nothing in the manufacturers’ catalogs or online that said the cable used was water-blocked or special in any way.

“This could be a situation where wireless connections might make some sense,” Lampen said. “Of course, they have a whole encyclopedia of problems of their own.”