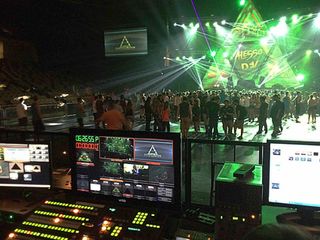 BILLERICA, MASS.: Broadcast Pix announced that Impulsive Creative Group, a systems integrator based in North Hollywood, Calif., used a Granite 5000 Video Control Center for GreenWaves III, a multimedia concert event, on April 11 at UCF Arena in Orlando, Fla. Presented by the University of Central Florida’s Campus Activities Board, GreenWaves is an annual event that promotes “green” sustainability awareness and initiatives.

Impulse Creative Group handles production design and show management for live events, as well as system design and installation for commercial and residential environments. While the company has installed a number of Broadcast Pix Video Control Centers in schools, GreenWaves III was the first time the company used a Granite 5000 for a live show. The system was rented from Complete Production Resources in Orlando.

“The side screens were controlled from it, too,” he said. “We used DVE effects to position robotic cameras to be in different areas of the on-stage video wall.”

There were 12 sources in use during the show, including robotic and handheld cameras, computer-based graphics, and a Grass Valley iDDR digital playout center. Fluent Macros were used for camera recalls and simultaneous playback of multiple sources.