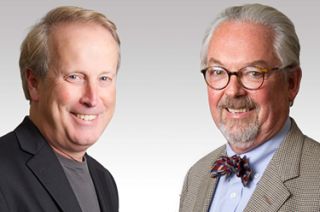 Ken Swanton (left) and Rob Flory
BILLERICA, MASS.: Broadcast Pix today announced a series of personnel changes to strengthen the management of the company. Broadcast Pix President Ken Swanton has been promoted to CEO, financier Robert H. Flory, Jr. is now chairman of the board of directors, and entrepreneur Ron Gruner is now a member of the board.

Swanton's has led Broadcast Pix since co-founding it in 2002, and previously served as president of Echolab for five years. For the 16 years before that, he was vice president at Digital Equipment Corp., the world’s second largest computer company at the time.

Flory has been president of Flory Investments, Inc., a privately owned investment company, since 1995. Since 2004, he has also been chairman of portfolio company, Chemogen, Inc., which created a patented antigen-specific test for the diagnosis of tuberculosis in HIV patients. In addition to playing an active role at Chemogen and now Broadcast Pix, he also oversees some of the sales and marketing activities of Eberle Winery, a portfolio company since 1996.

Gruner is chairman and co-founder of Sky Analytics. Previously he founded Shareholder.com (originally Direct Report Corp.) in 1991 and served as its president until 2006, when it was purchased by NASDAQ. Before that, he co-founded and was president of Alliant Computer Systems which became a public company. Gruner holds 24 patents from his extensive work in the computer industry.