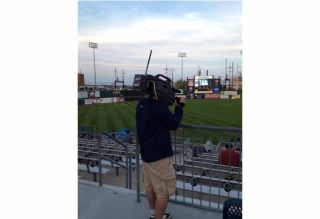 The Bridgeport Bluefish use HyTRON 50 batteries in a wireless camera set up on the field of the team’s home stadium, The Ballpark at Harbor Yard, and another camera in the press box. The field camera also utilizes Anton/Bauer’s Ultralight camera mounted lights. The video productions are a simple operation, with employees feeding camera footage to a production switcher and then onto a video board for mixing.

While the production crew uses Anton/Bauer’s 50Wh HyTRON 50 NiMH battery and DUAL 2722 PowerChargers, the team recently tried out the DIONIC HCX battery, AB-HDRF system and AB Direct VU handheld monitor/receiver. With a 124 watt-hour capacity and the ability to sustain a 10 amp draw, the DIONIC HCX will run a 40 watt camera with a 20 watt light for two hours.

“We especially liked the longevity of the DIONIC battery,” said Paul Herrmann, public relations director for the Bridgeport Bluefish. “It helped us get more shots inside the ballpark and we didn’t have to change out the battery during the game.”

Anton/Bauer’s new AB-HDRF is a compact 5.8 GHz COFDM RF system that can transmit a robust HD signal over distances. Utilizing the license-free 5.8 GHz frequency band, the AB-HDTX sends its signal directly to the AB-HDRX dual-diversity receiver or the AB Direct VU handheld monitor/receiver.

“The system was very simple to use and integrated easily into our workflow to the video board,” said Hermann. “The Direct VU really helped us see shots that we couldn’t view directly on the board. We were impressed with both new offerings from Anton/Bauer.”