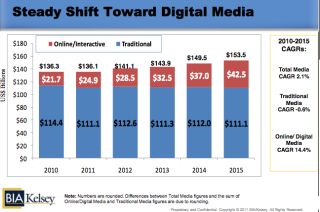 CHANTILLY, Va. and BOSTON: Local digital revenues will double between 2010 and 2015, BIA/Kelsey predicts in their latest ‚ÄúU.S. Local Media Annual Forecast.‚Äù The firm anticipates online/interactive advertising revenues to climb to $42.5 billion by 2015, almost double 2010‚Äôs $21.7 billion, representing a compound annual growth rate of 14.4 percent. The increase would coincide with expected continued improvement in the U.S. economy as a whole and a continued rise in local advertising. BIA/Kelsey says local advertising will reach $153.5 billion in 2015, up from $136.3 billion in 2010, representing a 2.1 percent CAGR.

The firm projects that digital platform spending will account for 23.6 percent of all U.S. local ad spending by 2015.

‚ÄúAs the business climate improves and advertisers step back into the market, they are gravitating to digital options that perhaps were not as mature before the recession began,‚Äù said BIA/Kelsey‚Äôs CEO, Tom Buono. ‚ÄúOur analysis indicates that as advertisers move to online, mobile and, particularly, the variants of social media, we are fast approaching a tipping point where digital media will soon become a dominant segment of the local advertising marketplace.‚Äù

The firm cites the growing adoption of mobile devices, particularly smartphones and tablet computers, as key drivers in its forecast. More pay walls also are expected to be erected as newspaper revenue erodes. Social media is also a factor. Consumer spending on deal-a-day offers, such as those on Facebook and Twitter, is expected to reach $3.9 billion by 2015.

‚ÄúAs we look forward, the core issue challenging advertisers is to figure out a media plan that leverages the transactional nature of digital media with the scale and reach of traditional media,‚Äù he said.