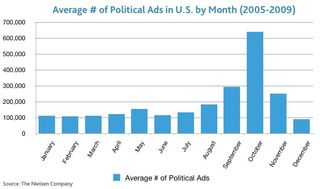 NEW YORK: American TV viewers were exposed to almost 1.48 million political ads in October, up from the 1.41 million aired in October ’08 before the presidential election. Nielsen released the numbers today.

TV viewers in the Cleveland, Ohio, market were exposed to the highest proportion of political TV ads--23.4 percent--in October. Of 126,656 paid TV ads on local Cleveland stations, 29,689 were placed by a political candidate or a third-party interest group. The market with the second highest political-ad exposure was Columbus, Ohio. Nielsen noted that the state is a traditionally hot political battleground.

Portland, Ore.; Sacramento, Calif.; and Seattle rounded out the top five. TV viewers in Jackson, Miss., were exposed to the lowest proportion of political TV ads--1 percent--in October. Of 81,218 paid ads on commercial stations for the month, just 827 were political. Four of the 10 least saturated markets were in Texas; two were in Tennessee and one was in Nebraska. Salt Lake City was the fourth least-saturated market with just under 3 percent.

Nielsen data since 2005 suggests that TV distributors air twice as many political and issue ads in October than any other month, on average. A spreadsheet ranking all 128 markets in Nielsen’s October political ad analysis is available at the company’s blog site.