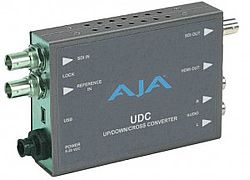 The UDC features SD-HD-3G input and output capabilities, as well as HDMI output and two/channel audio input via RCA/type connectors. It supports 1080p50-60 formats and eight channels of embedded audio. The device is also configurable either via dipswitch settings or from its USB port with the use of MiniConfig software.

The LHe Plus provides video record and playout functionality at nearly 25 percent of the cost of its precursor, the KONA LHe. The new unit cones with an extensive feature set, including 8/ or 10/bit uncompressed video I-O, two/channel AES and eight/channel embedded digital audio I-O, high quality hardware conversion from HD to SD, and improved RGB graphics performance.