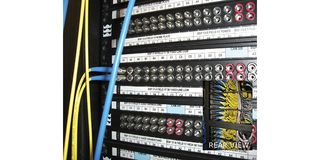 This Winchester-Kings EL-series optical patch panel is installed at a sports arena in Florida.

ALEXANDRIA, VA.—According to the web site Statista, nearly two-thirds of U.S. households owned an HDTV set by the end of 2011. Now that HDTV is firmly entrenched in this country, there are distant noises about a new higher-definition TV standard: 4K, sometimes called Ultra HD.

The final resolution for 4K has not been firmly established, but it will be at least four times the number of pixels now on a standard 1080p HDTV. The first expensive versions of these displays mostly have resolutions of 3,840 x 2,160 pixels, or approximately eight million pixels.

How do you feed signals to such displays? More important to the video production community: How do you distribute such signals in a facility? What sort of cable and connectors are you likely to need?

The short answer is “fiber.” The superior bandwidth of fiber (as compared with copper cables) enables it to carry just about any signal for relatively long distances. However, 4K systems will need interconnection cables for components that are close to each other, and it’s likely that at least some of these cables will be copper.

NEW DESIGNS AND MATERIALS
“Uncompressed 4K is eight times the bandwidth of HD,” said Steve Lampen, multimedia technology manager for Richmond, Ind.-based cable manufacturer Belden. “Since there is no SMPTE standard yet [a new 4K standard is on its way], we cannot yet calculate the distance we can go on our various cable sizes.”

“These frequencies are seriously into microwave territory,” Lampen said. “Every aspect of design and construction becomes critical at these frequencies.”

Winchester Electronics’ Expanded Light series of optical jacks got a thorough shakedown in the 2012 Olympics in London. Designed to stand up to the rugged requirements of patching and repatching, the EL-series provides the increased bandwidth of fiber without the worry about cleaning fiber connectors, scratching the ferrules, and bending or breaking the fiber.

“With traditional fiber-optic connections, they must be cleaned between every 10-20 or fewer matings to ensure reliable operation, and inexperienced operators cleaning connectors can actually cause scratches and other damage that may cause increased losses or broken fibers,” said Jerome Farnan, director of advanced optical fiber for Winchester Electronics in Franklin, Mass. “We tested the EL-series to 5000 cycles without cleaning, and the hardened steel of the EL-series connector and video jack mating surfaces gives the reliability needed for an active broadcast operation.”

The latest version of HDMI (1.4) is rated for uncompressed 4K signals. Winchester (and its sister company Kings) now has lots of experience using fiber patch panels in large, complex systems. That experience will hold up well for 4K signal distribution. In at least one busy sports arena, Winchester-Kings EL-series patch panels save significant time and improve signal quality.

“At one big facility, it took three to four hours each day to set up all the signal feeds to transport the signal back to the company headquarters for redistribution across the various networks,” Farnan said. “Even after this setup procedure was completed, because of the issues with dirt and dust, there was always a question about whether it was going to work, or if there would be signal loss throughout the day. After installation of the EL-series patching system, the setup time was reduced to around an hour, and in the words of the production engineering manager, ‘we don’t have to worry about that part of the system any more’.”

WHAT ABOUT HDMI?
So the technology exists to conveniently interconnect and patch 4K signals, although terminating fiber-optic cables in the field remains a special skill that requires specific equipment.

A consumer interconnection standard called HDMI (High Definition Multimedia Interface) uses twisted-pair copper cable, and the latest version (v1.4) is rated for uncompressed 4K signals. V1.4 of HDMI can carry data at rates up to 10.2 Gbps, and its standard 19-pin connector includes separate pins for control and even 50 mA of 5 VDC power.

Production professionals have been using HDMI extensively in the past few years, as shooting with large-sensor dSLR cameras became practical. Most of these cameras do not have typical broadcast connectors such as SDI, but rather have more consumer- oriented connections such as HDMI and USB. It helps that inexpensive recorders and monitors are available that also connect with HDMI.

Belden’s 1694F RG6 cable is stranded for flexibility and sweep tested to 4.5 GHz for consistent performance. With the latest version of HDMI capable of carrying 4K signals, it seems reasonable to assume that some short-distance 4K interconnection will be done with HDMI cables, despite their consumer origins. More professional cabling and connector standards are coming, but are still a way off.

“HDMI is a consumer standard—it uses twisted pairs instead of coax, even though coax is demonstrably superior at high frequencies and greater distances,” Lampen said. “Compared to coax, [HDMI] cables are limited in distance, impedance tolerance [return loss] and many other parameters.”

At the moment, the lack of broadcast industry standards for 4K distribution and cabling has a big manufacturer like Belden guessing as to what the testing and quality assurance requirements will be.

“If any manufacturer says they have 4K copper cabling [for professional 4K], I would very much want proof,” Lampen said. “This cable will have a bandwidth of 10 to 12 GHz, and most current test gear won’t work past 3 GHz at 75 Ohms.”

Of course, all these signals are digital and, where digital signals are involved, the ability to use standard networks to transport the signals can’t be far behind.

“The real solution might be Ethernet AVB, which is networked video run on high-bandwidth networks,” Lampen said. “Forty gigabit networks are just about to arrive [40GbaseT] and will probably be available on copper and fiber. The next one will be 100 gigabits [100GbaseT], and that sure looks like it will be fiber only. When? A year or two for 40GbaseT, maybe five years for 100GbaseT.

Despite the fact that professional 4K products such as cameras and monitors have been available for a year or more, cabling and distribution standards for 4K systems have yet to be established. This may mean that the production community, which is not one to wait for professional standards before using new production tools, may have a major say in just how 4K equipment will be cabled and connected.

In the meantime, there are some cabling solutions for the existing 4K devices, including a way that permits convenient signal routing. Perhaps other solutions will see the light of day at the upcoming NAB Show.