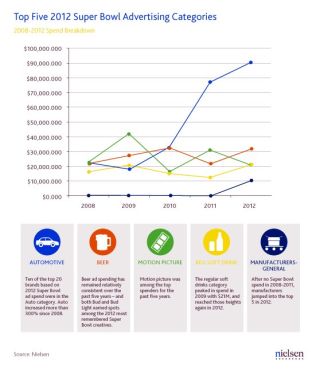 NEW YORK– Last year’s Super Bowl XLVI attracted 111.3 million viewers, making it the most watched U.S. telecast of all time. Advertisers spent an average of $3.4 million for a 30-second spot, up more than $300,000 from 2011, according to Nielsen.

Ads that aired during last year’s Super Bowl were also 34 percent more memorable and 42 percent better-liked than commercials that aired just a month earlier (January 2012). Many of this year’s big ad spenders were well-known names from familiar categories. Automotive, beer, motion pictures and soft drinks held their positions among the top-five categories, while the uptick in manufacturing spend for Super Bowl XLVI nudged out tortilla chips.