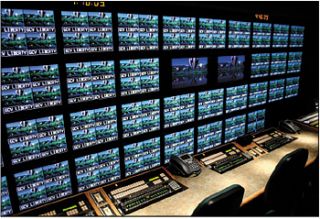 Wohler audio monitoring units are paired with intercom panels in the Game Creek Video Liberty HD mobile production unit.HUDSON, N.H.
The newest truck here at Game Creek Video—the Liberty HD mobile production unit—represents a departure from our usual truck design. Liberty HD is different in that it's actually a two-truck unit made up of a 53-foot expanding-side HD production unit and a 53-foot expanding-side graphics and support unit. Redesigned from the ground up, Liberty HD shares the cutting-edge technology and signal flow of our new FX HD production system, a series of trailers that leverage innovative routing and integration to provide maximum power and versatility.

However, despite the size of Liberty HD, we still needed to incorporate space-saving monitoring solutions into the "A" unit's production area. We'd always relied on Wohler audio monitoring solutions in the past, typically working with the company's four- or six-channel units, and this time we were able to use the Wohler VMDA-SUM8 analog/digital summing audio monitor to put eight channels in the same amount of space. The VMDA-SUM8 provides self-powered stereo or mono monitoring in a 1 RU rack size and has a depth of only 4.5 inches. We use six systems in Liberty HD to enable flexible monitoring and mixing of intercom aux inputs.

The summed output feature on the Wohler VMDA-SUM8 was a major factor in our purchase decision, as it offers our operators the convenience of creating a small eight-channel mix down—from eight mono or four stereo channels, either digital AES/EBU or standard analog audio inputs—into one headset. As a result, the production staff can put that audio in their ears rather than just look at it in front of them.

Since its rollout in August 2008, Liberty HD has been put to work primarily for college football on ABC and ESPN and, more recently, for production of NBA games. On game days, the Liberty HD production staff typically use the VMDA-SUM8 for discrete sources such as IFB talkback, network returns, and producer and director hot mics. Working with eight volume controls on the front panel, operators can adjust each channel in the summing mix independently. A master volume control, also on the front panel, provides easy control over all eight selected channels. The option to look at it all, right in front of them, in the conventional setup, or to listen selectively with a headset is a huge benefit for our production staff.

The Wohler VMDA-SUM8 At Game Creek Video we've installed a lot of Wohler gear in our trucks. In addition to the VMDA-SUM8, Liberty HD also includes Wohler's VM-2A for utility audio monitoring in the video shading area, an AMP1-DA/106 for analog/AES monitoring in the audio room, a VAMP2-SDA in video I/O for monitoring transmission audio and video, and VMQ-4 units at virtually every operator position for monitoring of audio router outputs associated with nearby video monitors.

We feel confident working with Wohler equipment and were the first company to install the VMDA-SUM8 system with the summed output feature in a mobile production unit. We expected the VMDA-SUM8 to function as advertised, and it has. It's not the sexiest part of our truck, but it works. We just don't have to think about it, and this is why we'll continue to invest in and work with products from Wohler.

Jason Taubman is the VP of design and new technology at Game Creek Video, and is a 15 year veteran in the industry. He specializes in the design and integration of mobile television production facilities used primarily for major sporting event coverage by all of the U.S. television networks. He may be contacted at jtaubman@gamecreekvideo.com.