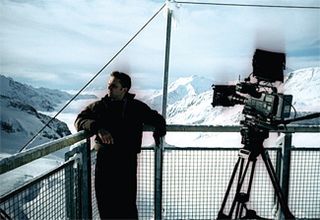 Jeremy Benning on location
TORONTO
I first discovered OConnor equipment about 10 years ago when I was shooting music videos. Some of these projects were very elaborate and I knew that I needed a camera head that was extremely stable and sensitive for these heavily operated jobs involving a lot of camera movement.

NO LENS TOO LONG OR TOO HEAVY

The OConnor 2575 was the perfect answer. I soon discovered that long lenses or heavy setups are no problem when using the 2575. Since that time, OConnor has become my primary head on every project I shoot.

A perfect example was a recent project that visually explored the world of sperm. We shot with the RED camera and F900R in water slides, farm fields, studios, the Canadian Rockies and the United Kingdom.

We used OConnor's 2575 and 2060HD heads for our A and B cameras. The RED lived on the 2575 with the Optimo 24-290mm zoom lens, and the Sony F900R—with either Zeiss DigiPrime or DigiZoom lenses—was on the 2060HD whenever it was not supported by a Steadicam mount.

In one sequence, we really needed the stability and sensitivity of the OConnor head. We were doing extreme telephoto shots of sperm charging white cells—in this case, people in costume running towards the camera in super slow motion, as I panned with the long lens across an open field. Without the stability of the OConnor head, we wouldn't have been able to make those slow, smooth pans.


Recently, I finished a project for The History Channel, which involved the shocking story of the Manson Family murders. Director Neil Rawles and I wanted this to have a classic film look, indicative of the period in which the crime occurred—the 1960s. We needed sharp, smooth, images, so we chose the Sony F900R and the Zeiss DigiPrime and DigiZoom lenses.

And, of course, a big part of this project was my trusty OConnor 2575. There is one particular sequence where the ability to make very slow and subtle dolly moves required the touch of the OConnor 2575.

We were working on a saloon scene where Manson is sitting and thinking about the upcoming murders. To emphasize the moment we needed precise action and through very slow dolly movement. I don't think we could have gotten that emotional impact, without this particular camera head.

No matter what I'm doing, there's always an OConnor head in my shooting package. For my travel documentary work, I've really come to appreciate the compact build of the 2060.

While the 2575 is by far my favorite fluid head, for field documentary work and similar run-and-gun shooting, it can be prove to be a bit heavy to lug around by yourself. The 2060 has the same feel and very similar ergonomics to the 2575, so it's a great option when small form factor and light weight is the priority.

Jeremy Benning is a Toronto-based freelance cinematographer who works internationally shooting commercials, films and documentaries. He may be contacted at www.jeremybenning.com.