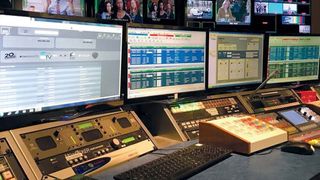 With a simple switch in the control room, enCaption4 can be activated to generate real-time live. (Image credit: Enco)

Due to the ad-lib nature of a local program recorded for broadcast later in the day, we’ve had to add captioning during the editing process. This is extremely labor intensive so we decided to “live caption” the program. However, this in itself presented operational issues with the live captioning service.

At the start of each show, the captioner needed to enter a code that allowed them to transfer their live captions directly into the encoder for processing. But if, at the end of the show, they neglected to enter another code to “hang up” or disconnect the encoder from this bypass mode, the encoder could not pass through the next show’s existing captions—stripping them off instead. This led us to seek other options and, ultimately, take the reins of our live, local captioning efforts ourselves.

When we first demo-ed ENCO’s en-Caption4 automated, real-time closed captioning system in our studios, we found it extremely easy to use. We didn’t need to tweak it to make it run better, it just worked. Everybody was happy, and we agreed that we had found the right solution.

Since then, we have been so pleased with the performance of our first en-Caption4 installation for WBOC-TV that we subsequently acquired and deployed a second unit for FOX-21. Today, these two on-premises captioning servers generate real-time closed captions on separate broadcast signal paths for CBS-16 and FOX-21. These software-defined, automated systems generate and feed accurate, real-time closed captions directly into our closed-captioning encoders, which in turn send the output to our ATSC broadcast encoders.

Now, with our enCaption4 servers, the only manual touchpoint is for someone in our production control room to throw a toggle switch on or off to start or stop the live captioning. The switch allows us to remote control the two enCaption4 servers, which reside in equipment racks in master control.

Our ENCO servers are used during our live local news programming, including the 5 p.m. and 10 p.m. newscasts on FOX-21, as well as daily public affairs shows like “Delmarva Life” on WBOC-TV. While our news teams use AP’s ENPS newsroom computer system (NRCS), which could create captions for news packages and scripts itself, we prefer to have enCaption4 generate the captions for our newscasts and shows during live playout.

We continue to be pleased with how well the enCaption4 systems are performing, and have received zero viewer complaints. Compared to the live captioning services we previously used, our two enCaption4 servers—which we lease—are saving us thousands of dollars per year in operating costs.

With minimal intervention from our engineers, the enCaption4 closed-captioning systems are always ready to go, easy to use and reliable, enabling us to efficiently and cost-effectively meet our FCC mandates and viewer expectations.

For more information, visit www.enco.com or contact Sam Bortz at ENCO Systems in Michigan at 248-827-4440.