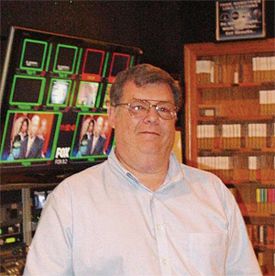 Frederick Vobbe
LIMA, OHIO
Here at Block Communications, we're doing something that may be unique. One of our stations, WLIO-TV in Lima, is running programming from all four major television networks—NBC, ABC, CBS and Fox—from a single control room.

The need for multiple programming streams was one of the driving forces in a major control room update. The other was the desire to move into high definition.

The technology that's enabling one operator to run four HD stations from a single control room is a Utah Scientific Utah-400 digital router, which serves both as routing system and master control switcher. The router and Utah's MCP-2020 control panels have enabled us to set up four unique operating positions, each customized to suit the programming, news and character of its channel. We also rely heavily on the features of the Utah Scientific equipment and of our WireReady automation system.

We wanted to create a master control facility that was both highly functional and as user-friendly as possible. One of the factors governing our selection of Utah Scientific equipment was that it was so intuitive and easy to use by our operators.

In designing our group's four-channel master control, we needed some customized features, and Utah Scientific worked with us to develop them. One is "emergency join," which allows us to broadcast breaking news simultaneously on all four stations. The second is a bypass of the automated emergency alert system (EAS) so the station's meteorologist can provide his own weather updates. We also take advantage of the master control system's master/slave feature to tie one station's feed to another for public service features including news, weather, sports, elections and breaking news.

The facility is responsible for preparing some 430 different programs for air every week. Our automation system and ASR (automatic satellite recorder) directly interface with the Utah digital router for selection of the program and satellite dish for each recording. And a dedicated server controls router output for automatic streaming and recording of news for our Web site.

I've been working in broadcasting since 1968 when I was a high school student, and in all my years in this business, none has been more exciting than the last one. We're participating in a paradigm shift in the industry, where technology enables television groups such as ours to enhance services to viewers, while operating cost-effectively. Today, Block oversees facilities that are more than just TV stations; they are content providers. That means delivering much more than just a network feed; a significant amount of locally produced content has to be there as well.

KEEPING IT CLOSE TO THE COMMUNITY OF LICENSE

Our operation believes that if a TV broadcaster wants to remain strong, it has to maintain its identification with the local community. Our new master control today is equipped to handle as many as 10 channels, so we have the capacity for adding more content, be it dedicated weather or sports, classic television programs, or farm programming. As far as we're concerned, the choices are limitless and our new routing system has helped to make this possible.

Frederick Vobbe first joined WLIO in 1985 and was named Block Communications corporate director of engineering this year. He is based in Lima, Ohio. He may be contacted atfvobbe@wlio.com.

For additional information, contact Utah Scientific at 800-453-8782 or visitwww.utahscientific.com.