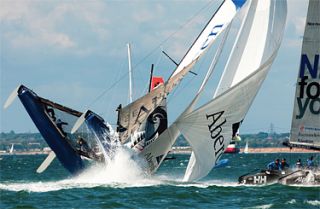 Telestream’s Wirecast is used to stream Extreme Sailing Series scenes such as this to worldwide audiences.
ISLE OF WIGHT, U.K.: The Extreme Sailing Series is an inshore "stadium" racing circuit that brings the best skippers on the planet to cities all over the world. OC ThirdPole is a global sports marketing company that specializes in professional sailing and other outdoor events, and has helped bring these sailing events to worldwide audiences since the series inception in 2007. The event's official TV production company, Sunset+Vine APP, captures every event for global distribution., and local broadcasters frequently cover the event on their own. We wanted to take this a bit further and enhance that coverage by adding live Webcasts so that fans could access the event on their computers, tablets, or mobile devices.

The Extreme Sailing Series venues offer challenging stadium sailing in major cities, with audiences often standing less than 20 feet from the 40-foot catamarans. We wanted to take that same experience to fans in a live Webcast, but had a limited budget for doing remote production for a show that moves all over the world.

Also, we wanted to provide a professional broadcast look and feel that fans have come to expect, even on mobile devices. Further, we wanted to distribute the event simultaneously on multiple platforms such as our YouTube channel, partner sites, our iOS server for iPads and iPhones, as well as to a local drive for program storage.

Given our budget, taking a van load of video production and satellite gear to sites all over the world was not an option. We needed something that was portable, in addition to being affordable. While we had had some exposure to Telestream's Wirecast live video production and streaming software in other events, we kept our options open and explored several other live streaming alternatives. However, we kept coming back to Wirecast, as it offered a very high production value at a competitive price. Wirecast operation was also intuitive enough for crew members without video experience to easily use it to produce Webcasts. Wirecast's ability to output to our various distribution formats made it the natural choice for us.

We now create and stream professional-quality, live sports productions with just a camera, an Internet connection and Wirecast running on a laptop. The races are captured by a high-mounted static Webcam with a full harbor view, which is typically set up by the local broadcast production crew. Video and the local event commentary are fed to an encoder as a composite signal. We then use a FireWire connection to feed those two signals into a MacBook Pro. Wirecast combines the video and audio and allows us to add images, titles and transitions for a sophisticated, professional-looking end product.

We now produce a full-featured live Webcast of each race on the Extreme Sailing Series at negligible cost. The complete remote production equipment package fits in a laptop case. And this year, we're planning to incorporate feeds from additional shore-based and on-water cameras. With Wirecast's almost non-existent learning curve, I cannot overstate how easy this powerful coverage has been to produce. It's also been very affordable as well.

Wez Maynard is marketing and brand manager at OC ThirdPole. He may be contacted at wez.maynard@octhirdpole.com.

For additional information, contact Telestream at 877-681-2088 or visit www.telestream.net.