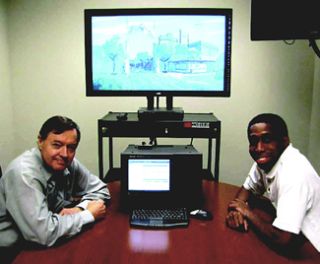 Ron Wright (L), principal engineering manager, and Brian Nobles, regional headend supervisor for Time Warner Cable Carolinas.
CHARLOTTE, N.C.
With the advent of digital and HDTV, the interplay between cable companies and broadcasters has become more critical than ever. Viewers now expect a flawless, high-quality HD experience at all times.

Delivering that experience isn't getting easier. In fact, it's getting much more difficult as technology evolves and new services and standards are rolled out.

My primary focus is on MPEG equipment for all the areas we serve in North and South Carolina. During the past few years, we've adopted a regional approach, centralizing equipment and engineering into regional hubs. The network covers most of the major metropolitan areas across the Carolinas, and problems can occur anywhere from the headends to the set-top boxes.

In this environment, there's no room for toys when it comes to MPEG stream analysis and testing. If there's something that will help ensure a better customer experience, we can't afford not to buy it. That's where the Tektronix MTS430 MPEG analyzer fits in.

A key part of delivering a quality experience is finding the root cause of problems in the transport stream. It's no longer good enough just to spot a problem, reboot the set-top box and hope that it goes away. The MTS430 allows me to go as deep as I need into the transport and elementary streams to track down sources of picture anomalies or— as happened in one case—discover that a closed caption stream contained too much information, causing set-top box buffers to overflow and precipitate automatic reboots.

While the MTS430 provides real-time analysis, the instrument's ability to capture events for deep analysis is critical to identifying the root cause of problems. Especially useful are the manual pre-triggers that not only capture an error, but also provide information leading up to the error.

Recently I had to deal with a situation in which a DVR from a major consumer electronics manufacturer that was misbehaving whenever it was tuned to a switched digital channel. I took the MTS430 to the customer's location and discovered the device was dropping the encryption key whenever a service was added to or removed from the multiplex. I then wrote a detailed letter with screen shots and test reports to the DVR manufacturer. The company soon acknowledged that they could replicate the problem in their lab, and they provided a software update that solved the problem. This eliminated many expensive truck rolls for my company.

Another important value of the MTS430 is that it is standards-based and can immediately tell if audio or video is not compliant. With all of the many different standards and technologies, it's impossible to be an expert on them all. The MTS430 removes a lot of the complexity. In today's world of digital broadcast, an instrument like the MTS430 isn't just a nice thing to have, it's a necessity.

Ron Wright is principal engineering manager for Time Warner Cable Carolinas. He may be contacted atron.wright@twcable.com.