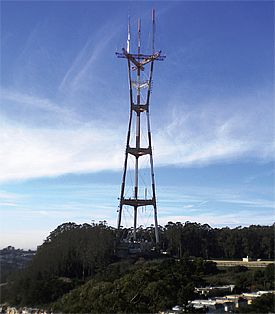 San Francisco's Mount Sutro television tower
SAN FRANCISCO
With 11 television stations broadcasting from our multi-tower site on San Francisco's Mount Sutro, completing any upgrade to our transmission system is a serious undertaking. For Sutro Tower, the final steps to digital broadcasting spanned the better part of a year and required a multimillion dollar investment.

In 1999, as the FCC moved ahead with plans for a digital TV system, Sutro Tower installed four interim UHF antennas for digital broadcasting. These were designed to be used until the existing analog antennas could be replaced.

Fast forward 10 years, and we were at last ready to devote the coveted top-of-the-tower space to permanent digital antennas.

Throughout its history, Sutro Tower has often relied on transmission technologies from Dielectric Communications, and we called on that company for this final digital upgrade.

Before installation began, we performed structural upgrades to the tower, and replaced most of the supporting steel in the three 200-foot antenna supports at the top of tower. Also, before the analog shutdown, we ran cabling, installed combiners and three new Dielectric auxiliary antennas, basically doing everything we could to ensure we could move quickly to replace the analog antennas.

After the 2009 switch from analog to digital, the analog antennas were removed during a four-month program for installing six new devices.

Now that this has been completed, the bulk of our TV transmissions are handled by two TUM UHF top-mounted antennas. One of these facilitates broadcasts from KPIX-TV, KRON-TV, and KTVU, while the other handles transmissions from KQED, KMTP-TV, KCNS, and KCSM-TV.

Due to broadcast pattern requirements specific to the stations, we also installed a TFU-30 top-mount antenna for KOFY-TV, a TFU-26 antenna for KFSF, and a TFU-19 for KBCW. KGO-TV, our only station retaining its analog VHF frequency, received a new TCL-6-A7 antenna for its transmissions.

Two TUA auxiliary antennas, a THV auxiliary antenna, four branch combiners, lots of 8-inch and 6-inch transmission line and associated components comprised our extensive installation. We had an explicit timetable for installing the new gear, and Dielectric met every delivery deadline with ease.

We're now using Dielectric's Symphony RF monitoring system to keep a close eye on the antennas. It provides us with a real-time look at the health of our antennas, automatically reporting problems, and even shutting things down if VSWR goes too high.

The Bay Area's array of hills and valleys guarantees a challenging broadcast environment. We know that under such conditions there will never be a perfect transmission system, but independent testing through Hammett & Edison Consulting Engineers shows that our Dielectric installation is performing equal to or better than predicted. We now have a digital transmission solution that more fully meets our broadcasting needs today, and one that has even opened the doorway for mobile media broadcasting in the future.

Eric Dausman has served as VP and GM of Sutro Tower Inc. since April 2009. He may be contacted atericd@sutrotower.com.

For additional information, contact Dielectric Communications at 561-447-2123 or visitwww.dielectric.com.