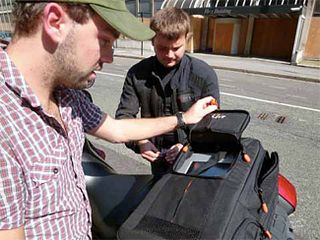 Have you ever ridden a bicycle 300 miles in a day for charity? No? Me neither, and I was somewhat surprised recently to discover that is precisely what 10 riders had in mind: 300 miles from IBC’s offices in London to the RAI in Amsterdam the weekend before IBC 2011.

I am a freelance cameraman based in Manchester in the UK with my own company, Flagtime Films. For the past five years or so I’ve worked on a wide range of projects – usually in Manchester or London – including music videos, commercials, and other corporate shoots. I’ve also worked for broadcasters including the BBC and Sky.

My role was to be a cameraman covering the IBC2IBC ultra-marathon ride. By the time I came on board, plans were well advanced to stream live footage to ibc2ibc.com.

This would allow people sponsoring the event to watch the cyclists’ progress.

This is where LiveU’s technology – kindly supplied free-of-charge via Garland Partners in the UK – came to the fore. This is the first time that I’d come across cellular uplinking technology that, in backpack form, allowed live signals to be transmitted from the field via 3G, 4G, WiMAX, or Wi-Fi for broadcast or streaming.

My immediate reaction was one of skepticism: How could 3G networks sustain any kind of picture quality at all? Not only that, but we would also be shooting in the UK plus France, Belgium, and the Netherlands too. So how would it handle roaming?

Well, we set up the technology outside IBC’s offices in London, by simply attaching a Sony Z1 camera to the backpack containing the LiveU unit – and immediately it worked. Via mobiles and laptops, we could see the riders ready to go; nervous yet excited at the same time.

Now the details: the LiveU backpack could support 7 x 3G data channels, or modems. In this instance, the LU60 was configured with roaming SIMs. This gave it the ability to connect to multiple mobile providers throughout Europe.

The flagship LiveU LU60 unit split the camera feed – having encoded it using H.264 – across all the available 3G capacity using multiple networks; creating a virtual wide pipe. As we moved between cells, this approach constantly ensured maximum signal quality.

At the other end, the signals were then received by a server – LiveU’s LU1000 technology. This used a static IP address and the backpack unit was pointed to that receiving address.

The software then reassembled the feeds back into a high quality picture. In this instance it was configured to subsequently push the transmission to a Flash player; the video having first been encoded by an Adobe Flash Media encoder on the server. Of course, it could have been an SDI output or any of a number of other output options.

My initial skepticism was quickly swept away by the results. This technology was crazy and brilliant at the same time. I couldn’t believe the quality it achieved, with HD entirely possible. The picture was rock solid, not sketchy or prone to break-up at all – and the roaming was seamless.

It was very, very impressive – in fact, almost as impressive as watching 10 men cycle 300 miles to raise money for the Vision Charity. Almost, but not quite! A spectacular effort all round.

Ed Lister is a freelance cameraman and owner of Flagtime Films.