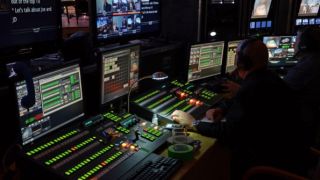 Headquartered in Atlanta — with offices in Miami; Orlando; Charlotte, NC; and Las Vegas — Spectrum has been providing AV production services for corporate meetings, conventions and trade shows, as well as video support for concert tours, for more than 20 years. The Granite system was purchased in October to help clients create a high-end broadcast look for their stage productions. Spectrum uses the Granite to enhance production values for certain events, and to elevate clients' presentations from the PowerPoint look.

Several features made Granite an ideal solution for Spectrum. One thing that seems to be a problem in new switchers is a lot of frame delay. Delay is a big problem for live events. One factor in selecting the Granite was its minimal latency. The Granite 5000’s optional 12 SDI outputs were another important feature.

During the NASCAR banquet, Spectrum took full advantage of Granite’s built-in workflow tools. The Fluent Clip Store was used to access and playback more than 100 clips — but the production was far from simple. Throughout the show, videos were sent to various screens and combined with other sources and effects. Some cues included dozens of different commands. While the program would have been “really difficult” to execute manually, Fluent Macros triggered each cue correctly and without a predetermined timeline, which can be problematic during a live show.

Granite also helped make setup much easier and cleaner. Compared to setup for the same event last year, the Granite system replaced two switchers, eight computers, four HDCAM tape decks and four additional playback systems. All source content originated from the Granite, and the native HD system produced an outstanding look. The Fluent-View with Quad Monitor option was an asset during the NASCAR event as well, providing customized multi-view layouts for the TD and other production personnel during the event.