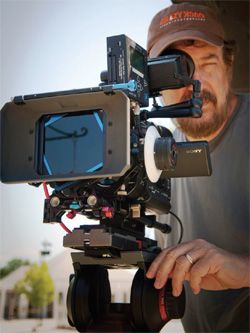 Chuck Fishbein
WEEHAWKEN, N.J.—Shooting any type of live footage is often a wild ride, but one of our recent projects was literally a roller coaster from start to finish.

My company is responsible for the majority of the promotional video work coming out of Six Flags Great Adventure and Wild Safari Park, as well as the Hurricane Harbor water park in New Jersey. Together with my partner, Sarah Fishbein, we create a B-roll package for all three parks that consists of ride footage including POV footage on all Six Flags roller coasters. Using this footage, a producer/reporter can stand in front of a coaster for his or her report and then include our B-roll footage when editing their piece.

THE RIGHT CAMERA FOR THE JOB

The cameras that we commonly use are Sony's PMW-EX1 and EX3, HXR-MC50, PMW-F3, PMW-500, and most recently, the PMW-350. For the newest Six Flags ride, "The Green Lantern," we put several of these cameras to the test for the footage we needed.

We also often time-lapse shoot the construction of new rides being built during the winter at the parks and use the smaller EX series cameras for this application.

The Green Lantern launch involved two camera operators: one with an EX3 mounted on a Genus Shoulder Rig and the other equipped with a PMW-350. The ride covers a lot of ground and we had to shoot before the park was open to the public.

We had 24 hours to deliver the finished product (as an electronic press kit) consisting of footage of the ride from all angles, POV footage, and reverse POV footage showing riders. We used Sony's extremely compact HXR-MC50 for this.

A key part of the project also involved conducting interviews with riders, as well as a video offering facts about the ride. All this was then compiled and uplinked to a satellite for distribution.

In compiling all of the footage, our cameras were subjected to several challenging conditions, including low light levels, bright sunlight and, of course, extreme vibration and shock from the rides. What set the Sonys apart was their ability to perform consistently through the varying environments, and provide us with a small and lightweight form factor and high-performance features.

The safety of the passengers and the ride itself is always a challenge when working on a coaster; the HXR-MC50's small size and weight allowed us to mount it in tight spaces while still providing our client with a full size HD viewfinder image for approval.

In addition, the EX3's auto-focus—though rarely used in most cases—helped to accurately track the high-speed cars while they roared past. And while it's easy to twist yourself into a pretzel when attempting to follow the Green Lantern's cars around its loops and curves, using a shoulder mount camera such as the PMW-350 allows you to intuitively follow the action. All in all we're very pleased with the edge that Sony cameras provided in capturing this exciting footage.

Chuck Fishbein is creative director at Crazy Duck Productions. He may be contacted at duckyou@optonline.net.

For additional information, contact Sony at 201-930-1000 or visit www.sony.com/professional.