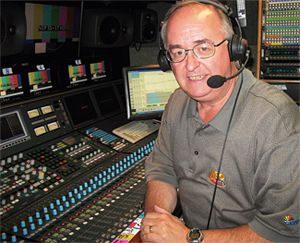 Randy Flick
PITTSBURGH. PA.
Late last year I spoke with Sennheiser’s Dave Missall about how HBO might upgrade the announce headsets that are used in connection with the HBO Boxing broadcasts. In these, the announcers sit in the middle of the crowd—right in press row—at ringside. We use five headsets at the main announce table and at any given moment, we could have anywhere from three to five headsets open. With that many headsets active in the mix, an announcer’s ambience level can get pretty high, as they’re right in the middle of “the mud, blood, and beer.”

The HBO Boxing announcers run the gamut, with voices ranging from very strong and punchy, to light. I’ve always had to push to keep them above the ring effects and the crowd. Also, during the past year, boxing promoters have been adding more PA to the arenas, making it even tougher to keep the announcers on top of the mix.

Dave informed me that Sennheiser would be coming out with a new series of headsets incorporating the company’s HSP-4 cardioid condenser mic. These elements have a mid-high presence that helps announcers’ voices (even the lighter weight ones) cut nicely through the mix. I told him that I really liked the sound of the HSP-4 and wanted to give the new units a try.

The new model—the Sennheiser HME-26 broadcast headset—is a much welcomed improvement on several fronts. First, the Sennheiser design team has changed the microphone boom to a heavier style with greater articulation. This helps eliminate any unwanted noises should an announcer touch the boom while speaking. Also, the HSP-4 condenser element, with its cardioid pickup pattern, helps announcers cut through the mix with much less ambient leakage.

The HME-26 headsets have some other new features as well. If the announcer positions the mic boom vertically, it mutes the mic output. Also, the headset earcups (which one of the HBO Boxing announcers describes as “wearing pillows”) have an “Active Gard” circuit to protect announcers’ ears from transients. (This feature is field-defeatable, if desired, by activating a small switch on one of the ear cups.)

As the new HME-26 headsets have an electret mic element, you’ll need to provide 48 Volt phantom power. (For the HBO Boxing broadcasts, I’m using Studio Technologies 220 IFB/Talkback boxes and have found that they handle the phantom power duties very nicely.) Also, make sure to get the Sennheiser headset cable that has the P48 adapter built into the XLR connector; it’s the model X3K1-P48. The native voltage for the mic element is 5 to 15 VDC, so you’ll have to use the step-down adapter that’s built into the cable in order for things to operate on 48 Volt power.

I’ve been using the HME-26 headsets for about three months now and have been very pleased with their performance. They’re definitely an upgrade in the “ambient noise rejection” category, and have outstanding audio quality to boot. Of course, this is what I have come to expect from Sennheiser.

Randy Flick is an Emmy award-winning 30 year sports mixing veteran and has been doing audio mixes for HBO Boxing for the past 10 years, and World Wrestling Entertainment for the past 25 years. He may be contacted atrjflick@att.net.