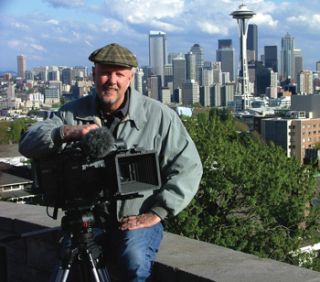 SEATTLE— I first got acquainted with Sachtler camera support products more than 20 years ago when I was chief photographer at KING-TV, the NBC affiliate here. We needed some new camera heads, and I did a lot of research and evaluation before settling on Sachtler. I recall being very impressed with the Sachtler 3+3 demo head that we evaluated because of its ability to maintain camera balance.

Bill Fenster HOLDING THAT SHOT
In the news business, you sometimes have to shoot a lot of documents in connection with a story, and with the Sachtler you could just tilt the camera down for the shot and then let go of the handle. The camera would stay exactly where you aimed it. You didn’t have to lock it down; it stayed where you wanted it. The old heads we’d been using would never stay put in such a situation.

Of course, camera balance isn’t important just for shooting documents. In situations when the press is kept a half-mile or so away from covering a plane crash or other disaster involving emergency response crews, we’d have to be zoomed all the way in with a 2X extender, which is an invitation for shaky images—something noone really wants to see on the evening newscasts.

As we were one-man-bands, size and weight were prime factors in our selection of camera support equipment too, At the time, I wasn’t 20 anymore, nor was anyone else in the department. And we were getting smaller news cars, so the tripod and head had to fit in the new vehicles.

We also had another major concern— we were buying 20 tripods, which was just enough for all of our camera crews. There was no provision then for spares. If one of the heads developed problems, it wouldn’t be something that our station maintenance people could repair. Most camera heads are constructed in such a way that it takes a specialist to fix them when they malfunction., so manufacturer support was also an important consideration. We needed someone who was going to be there to loan us a head while ours was being repaired.

In our evaluation, we discovered that Sachtler had really good service, the best movement of any head, and that the heads were small and light. We initially purchased some 3+3s and when it came time for a complete re-outfit, we purchased 20 Sachtler 7+7s.

SOME THINGS NEVER CHANGE
A few years later, I left the station to form my own company and bought a Cine 7+7 HD head for my own use. I still do a lot of one-man-band shoots, so the size and weight of the tripod system are just as much a factor as they were in my news coverage days.

Many of the other challenges are the same too, such as holding a steady shot with a lens zoomed all the way out. This Sachtler head is rock steady and provides me with a large payload range—4-48 pounds— and has 16 stages of counterbalance.

For the times when I’m using a camera package that’s greater than my head will accommodate, I rent a larger Sachtler head, often with a dual pan handles, so I can use a studio setup with zoom and focus controls. In fact, if I’m on a shoot where I’m using the client’s camera package and they don’t supply a Sachtler head, I’ll make sure to bring my own along.

Bill Fenster is the owner of Bill Fenster Productions and has been involved in news coverage, documentaries, and commercial features for more than two decades. He may be contacted atbillfenster@me.com.