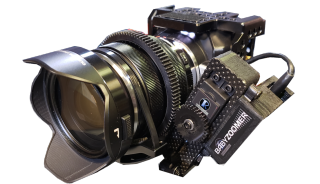 LAS VEGAS—RUSHWORKS focuses on creating new and helpful technology for production, playback and streaming, and will use its time at the 2020 NAB Show to spotlight all of its latest innovations in those areas.

First up is the company’s new PTX Model 1L PanTilt head, which boasts a more powerful tilt motor and a larger L-shaped tilt platform, per RUSHWORKS. This new model allows expanded compatibility with wider and heavier cameras/lens combinations. The pan/tilt head can be controlled using RS-422 Visca devices as well as DMX hardware and software.

RUSHWORKS also has its BABYZOOMER kit that allows operators to use a wide range of non-power zoom lenses from several manufacturers. The kit can work with PTX Model 1L and PTX Model 2, while also interfacing over IP with ATEM Production Studio for automatic input selection and preview/program transition from the touch-screen user interface.

There is also the RUSHDOLLY tool that now is fully integrated with RUSHWORKS VDESK, REMO and Ctrl+R production systems. RUSHDOLLY can create up to eight static or motion presets with ramping and preset delay parameters.

RUSHPROMPTER, meanwhile, will be on display showcasing its script creation and prompting abilities, which include RTF and TXT creation, export and import, find and replace, real-time font size adjustment, variable line spacing and individual character control of bold, italics, underline, colorize and highlighting. RUSHWORKS has also created a prompting stand that supports one or two 12-inch 16:9 monitors.

Another product set for display is the REMO NDI system for multicamera setup for remote production, recording and streaming. REMO NDI is powered by an All-in-One computer with 24-inch touchscreen and an i9 processor, as well as the RUSHWORKS custom shortcut keyboard, six-button Hall-effect joystick, an eight-port PoE GigE switch and two NDI PTZ cameras. The system’s software includes a video and audio mixer with transitions, PiP and double-box effects and Chroma-key.