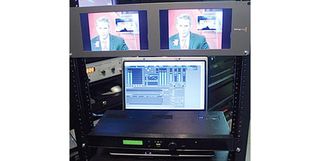 There are few applications in broadcast engineering that have been impacted more by the development of the PC than audio testing and monitoring. It's true that we still use our ears to evaluate the final product; however, anyone who has ever been up all night with a noise and distortion meter pulling a "proof of performance" certainly appreciates the wonderful advancements in audio testing and monitoring gear. And it wouldn't be possible to comply with all of the requirements of the recently enacted CALM Act with gear that was state-of-the-art just a few years ago. Fortunately, companies like Qualis, a Lake Oswego, Ore.-based developer of audio monitoring technology, have stepped up to the plate to make compliance and QC a piece of cake. The Qualis Sentinel reviewed here allows real-time evaluation of today's multichannel audio, as well as compliance logging, all from the ease a Web-based GUI.

Loudness monitoring standards include: ATSC A/85, ITU-R BS.1770, EBU-R 128, tech 3341, and tech 3342. Channel analysis functions include loss, excessive level, and hum. The system compares actual conditions to user-specified parameters, and can alarm and alert operators via contact closure and e-mail. Input audio formats include AES and analog (balanced or unbalanced), as well as SDI embedded audio. The chassis is 1RU high and 7-inches deep. Power consumption is about 12 Watts, and is supplied via an included external 24 VDC wall adaptor.

Each of these is presented as a window that can be selected from the toolbox on the left of the screen. At the bottom of the toolbox, there's an icon for "Show Settings." When this "Show Settings" button is selected, the screen changes, and parameters for the aforementioned choices can be modified. This is quite different from many "Tab-based" GUIs, and in my opinion, simpler and easier to deal with.

When modifications to parameters are performed, "Show Readings" can be selected in the toolbox, to take you back to the main monitor screen.

Vents for cooling the Sentinel are located on the rear, along with all of the connection ports, including: power, aux signal (DB-25), Ethernet, AES3 I/O (DB-15), and SDI in/out (BNC). The front of the unit features standard menu control buttons, with menu items displayed on a 0.75x3-inch two-line LCD screen, with a roller action knob located to the right. A green "power" LED is included, and when an alert condition exists, a large red back-lit "Alert" message appears.

For testing purposes, I fed the Sentinel with my television station's primary HD 1080i feed, which includes embedded audio. (Our local programming is provided in stereo, while syndicated and NBC network feeds can arrive in any combination of stereo, 5.1, or center plus Ls and Rs.)

After mounting the Sentinel in my test rack, I powered it up and the LCD display came alive with the Qualis name and the current firmware version number. After about 30 seconds, the date, time, and IP address popped up in the window. On the right side of the faceplate, an "Alert 1" appeared in red letters, which I suspect was due to lack of input signal.

For confidence monitoring of my input signal, I looped a program feed through a video monitor, and into the Qualis Sentinel SDI BNC input port. After about three seconds, the alert flag disappeared and the unit appeared to be happy, but I really wasn't able yet do any audio evaluation (although, the unit was logging). I used the device's LCD to try to glean a hint about audio evaluation; however, I found that a much better way to pull up all of the information via a larger external screen. This brought me to the next order of business—connecting my laptop computer to the Sentinel for access to the GUI. I connected a crossover Ethernet cable between the Sentinel and the laptop (for ease of connectivity), and after putting the laptop into the IP range of the Sentinel using my free copy of NetSet Manager, I opened the Internet Explorer browser and typed in the Sentinel's IP address. At this point, it was obvious that this wasn't going to work, although the Qualis GUI information did appear, confirming proper connectivity. However, the program was running sluggishly and often timed out. I do have to confess that my laptop is a bit old, and its 1.5 GHz processor and RAM aren't really equal to some of today's applications.

At this point, I emailed the tech support unit at Qualis, and in no time at all, they responded that I might have better luck using Google Chrome. I tried this and Chrome worked like a champ, even on my old laptop. I was able to view all of the monitoring windows—really too many to describe individually in this article. I bounced around the GUI, using the side toolbar to turn off and on different monitoring panes. Also using the side toolbar, I switched to the "Show Settings" screen, which allowed custom setup of all parameters: from metering preferences, to alarms and notification.

As neat as the monitoring was, at this time I redirected my efforts to creating, saving, and retrieving a log. The Sentinel uses Java to activate automatic file saving. This part did take another phone call to Qualis, and after Dave pointed me to the right dropdown, I was selecting times from the timeline and sending them to the Log Repository in short order.

I found that logs could be reviewed by simply typing in the date and time on the timeline window, retrieving them, and simply exporting them to a bin. Once exported, they're displayed in an Excel format. According to the manual, a day's worth of data works out to a file size of about 13 MB, while a month's data is sized at about 400 MB.

Qualis recommends Chrome v6.0, Mozilla v3.5, Safari v5.0, or IE 8 (or later) for proper operation. I would add that although I was able to get by on a "weak" PC, don't expect to operate this package on a really junky PC. (It works hard and expects to be fed!) My brief experience with Qualis quickly reinforced the fact that they really know audio. The support staff at Qualis has the knowledge and facts to help media professionals survive in this ever-changing industry. This box is very powerful and I have only scratched the surface in this review.

Joey Gill is chief engineer at WPSD-TV in Paducah, Ky., and has been with the station for more than 30 years. He has worked in television since 1977. He may be contacted at respond2jgill@yahoo.com.