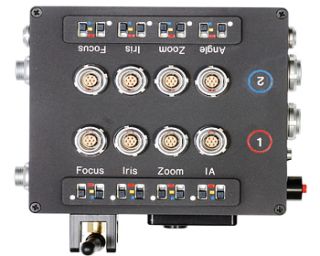 The Preston Cinema Systems MDR -3D eight-channel motor driver
LOS ANGLES—Our company has been in business for more than 30 years, and provides innovative camera and lens control systems for camera rental houses, OEM's, and individual users such as focus pullers and Steadicam operators and owners.

My goal in designing our company's first product, the Micro Force zoom control, was to create a device that would not only provide superior performance, but also deliver that performance with exceptional reliability. The Micro Force zoom control uses a force sensor technology to control zoom speed, and since its introduction, has truly become the "industry standard" control system in this area.

While designing that device, we knew that we would need trouble-free connectors, and sought out a company that could provide us with the sort of high quality connectors we wanted. We also looked for a connector supplier with knowledgeable, friendly and a team that was easy to work with. We evaluated a lot of connector companies, and ultimately determined that LEMO connectors were the natural choice for our project. The company had proven itself for many years by providing superb reliability and great technical support to all of its customers. These elements helped in the success story of our Micro Force product, and helped to make it an industry standard throughout the world.

Since that product was first offered, we've continued to expand our product offerings. One of these is a three-channel lens and camera control system, the FI+Z, which controls both lens functions (focus, iris, and zoom) and camera functions (speed, shutter angle, and VTR). The FI+Z system and the several breakthrough technologies that it incorporates, has also been well adopted by industry. It too relies on LEMO connectors to ensure a very high level of reliability. The FI+Z has been very well received by the motion picture community, and in 2007 the Motion Picture Academy awarded a Scientific and Engineering Award for its development to Mirko Kovacevic and myself in recognition of its contribution to the industry.

BUILDING ON A SUCCESS STORY

Our newest member in the FI+Z family is the Hand Unit 3. This device incorporates 3D functionality, and has become an essential tool for controlling both stereo lenses as well as 3D rigs. Once again, LEMO's products provide the sort of reliability that our customers have come to expect.

As our product line has expanded, LEMO has remained our connector supplier. Our FI+Z wireless control system makes extensive use of the company's products. Our latest addition to the family is the MDR-3D, an eight-channel motor driver for 3D applications. It uses 17 LEMO connectors. During its development process, LEMO came through with sample support and exceptional service. I look forward to our continued relationship with LEMO for future projects.

Howard Preston launched Preston Cinema Systems in 1980, and has led the design team responsible for a number of groundbreaking projects. He may be contacted at howard@prestoncinema.com.