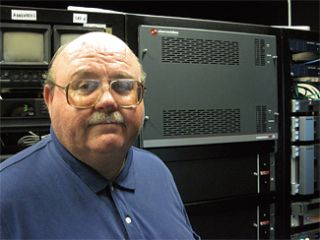 Bill Dawson
MALIBU, CALIF.
The broadcast and production facility at Pepperdine University's Seaver College is top-of-the-line. We're fully equipped with a production studio, newsroom, control room, master control facility, 15 Final Cut Pro edit stations, and a new Avid editing station. The facility operates as a state-of-the-art classroom during the day and as a fully-fledged student broadcast operation during the off-hours. The programming that we create actively serves the community here, and includes live news and sports, as well as talk shows.

We recently went through a major upgrade, transitioning to an entirely tapeless system, and at the same time converting our digital operations to 1.5G 1080i high definition. With our new HD cameras and Mac Pro server array, our students can work in pristine 1080i with real-time playout, and automate over-the-air delivery with tapeless storage and network-wide server access.

When we were putting this new system together, we realized that 3G 1080p isn't that far over the horizon and decided to prepare for it now with Sierra Video's Ponderosa 3G HD-SDI multiformat routing switcher.

Our facility has had a good working relationship with Sierra Video. We'd been using a Sierra Video Tahoe 32x32 analog video router for the better part of a decade, and it operated so reliably that it had become an afterthought. The system just sat there and worked and worked.

In our production facility, product longevity and reliability are considered serious values and we wanted to replace this analog router with something equally reliable.

I went to the NAB Show looking for an HD routing switcher, as well as a modular multiviewer for our control room and master control upgrade project. I made it a point to check out the competition, but I came back to Sierra Video when I found that they offered everything I needed—routing and multiviewer—plus the feeling of security that comes with proven dependable performance.

Sierra Video's Ponderosa 3G HD-SDI routing switcher was an easy choice, as it offers 64x64 HD-SDI video and can handle both our 1.5G 1080i signals today and 3G 1080p video when we're ready to add it. With the HD video landscape evolving so quickly, we didn't want to waste time and money by acquiring equipment that couldn't easily adapt to future requirements.

The Ponderosa integrated seamlessly with Sierra Video's SierraView multiviewer, which we use both in the control room and master control environments. It joined up with our existing Tahoe analog routing system without any changes to the automation control whatsoever.

The whole project was direct and easy. And with Sierra Video's track record I also knew we could get quality 24/7 support, with a knowledgeable person only a phone call away, should we ever need assistance.

3G VIDEO IS ALREADY A REALITY

Our 3G preparedness was a good thing, as 1080p video has arrived sooner than we expected. Some of our students have already acquired camcorders that work in this format and have begun using them for classroom and production projects. Our Sierra Video routing system is functioning just as we expected, and is allowing us to enter this next step in the HD evolution path without any hassles at all.

Bill Dawson is the chief engineer of television and radio at Pepperdine University's Seaver College Communications Division. He may be contacted atbdawson@pepperdine.edu.

For additional information, contact Sierra Video at 888-886-8875 or visitwww.sierravideo.com.