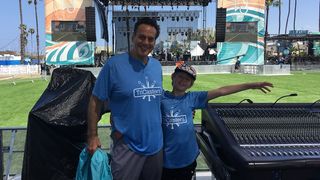 Brian Sheil has been using the NewTek TriCaster as a backbone of his production workflow while working on events like live concerts. (Image credit: Brian Sheil)

LOS ANGELES—When I’ve talked about being a certified NewTek TriCaster operator, I’ve likened it to having a bit of a “super power.” TriCaster has proven over the years to be a “dream catcher” of sorts. Many people have a creative project or vision, but they don’t quite know how powerfully or effectively it can be shared with the world. TriCaster gives you that power.

TriCaster is the technology on which I have built my business—Entertainment Services LA Inc. Since the beginning, I have produced a number of live music events, reality shows, game shows and network scripted television with TriCaster as the backbone. I’ve worked with Comedy Central, MTV, VH1, CBS, Viacom, NBCUniversal, the Oscars and even helped run a streaming channel for horse racing at one point.

Because TriCaster is a feature-rich video production powerhouse in a compact, mobile package, I’ve been able to flex not just creative muscle for clients,  but also offer creative reflex. I’m able to set up quickly in a small footprint within a club or venue, and use it to produce high-quality, multicamera video shows that stream to multiple destinations simultaneously, all without disrupting the patrons, performers or ambience.

And, as a “dream catcher” for clients, it’s been rewarding to make a lot of other dreamers’ visions come true.

However, as of writing this, a global crisis has shut down traditional production as we know it. Live events like music festivals have become non-existent. Television production has grounded to a halt. But, thanks to TriCaster, we are finding ways for the shows to go on.

An example of this can be seen in a project I recently completed in partnership with the BeachLife Music Festival. Last year we streamed a three-day event featuring Willie Nelson, The Beach Boys’ Brian Wilson, Jason Mraz, Ziggy Marley and the Blues Travelers. Using TriCaster live video production systems we were able to set up on-site and capture the performances from two separate stages on Redondo Beach.

With its incredibly small footprint, TriCaster provided the ability to set up exactly where we needed to be to effectively stream 13 hours worth of content on all three days.

This year we had to fundamentally alter the event due to the coronavirus. A remote setup was created, with talent performing from their homes and backyards. TriCaster remained core to the production. Located in my office, I was able to provide all the switching and graphics from my on-site TriCaster setup. We brought in talent using Skype—which integrates natively into the NewTek workflow—and allowed hosts to talk with musicians live. It also provided a high level of quality for both video and audio—critical for a music festival—all while enabling a completely remote production.

This workflow will be increasingly common in the coming months. I’ve already recorded segments for “America’s Got Talent” as the show ramps back up—again, completely remotely with the TriCaster serving as the production backbone. More shows are on the horizon, and will allow entertainment to more quickly return to us as we continue to shelter at home.

The versatility of TriCaster has proven to be impressive during this challenging time—but it isn’t a surprise. It is a complete system that offers creativity, flexibility and a bit of a super power for any job you might have in front of you.