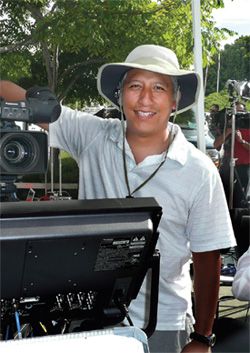 LOS ANGELES: The lighting needs in my daily assignments can cover the gamut from illuminating dark interiors to adding some fill to live stand-ups in California sunlight. The Lowel Blender lighting instrument has certainly simplified my life and allowed me to travel a lot lighter these days.

Dennis Funes You wouldn't think something as small as the Lowel Blender could be useful in so many settings, but it continues to prove a very versatile tool day after day.

The Blender's daylight and tungsten banks of LEDs have separate controls that allow you to adjust the light output and color temperature to your taste in what Lowel calls "an intuitive manner." As location ambient lighting tends to be more organic than either tungsten or daylight color temperatures, for me this is a practical approach.

I used the Blender as part of a relatively complex six-light setup in covering a conference that was illuminated with a mixture of tungsten and daylight sources. To provide a more balanced look, the Blender was set at a low height about three feet away from the action, with just a touch of the daylight LEDs fired up to help open up the shadow under the subject's chin.

The ability to mix color temperatures with the Blender has been useful too. One recent example was in its use as a "hair light" on a blonde correspondent covering the Dr. Conrad Murray trial. With the correspondent primarily lit by a couple of small HMIs, I found it nice to add a warmer tone to the hair with just a bit more intensity from the Blender's tungsten LEDs to the daylight bank. This changed the color temperature without having to fuss with gels.

LIGHT AT A DISTANCE

While it doesn't have the reach of a focusing camera-top light, the Blender does seem to penetrate further than other similarly-sized LED units. This allows me to add some diffusion to broaden the beam and still have a useful intensity. While I typically use it in a three-foot range, it still has a discernible effect past eight feet, even when using only one of the LED banks.

The versatility afforded in making custom color temperature adjustments on the fly is critical in mixed lighting conditions to allow me to quickly shoot the "B-roll" footage we gather for international distribution.

Seasoned photographers will appreciate that sometimes you don't have a lot of set-up time to make things come out right. In many cases, all you can do is add enough fill light to go along with the ambient light level and color temperature. It's usually a lot more expedient to change the color temperature of the added fill light (in relation to the other light sources), than to try and overpower or modify light coming in from windows and/or the unflattering overhead lighting. The Blender is really ideal for this.

While I've only used the Blender with AC power, and on stands, Lowel does list a good variety of powering and mounting options that interface with common industry standards. I'm anxious to try these too.

Working with this LED light has been a pleasant experience.

Dennis Funes has been in television news since 1992 as a photographer. He may be contacted at dennisfunes@hotmail.com.

For additional information, contact Lowel-Light Manufacturing at 800-645-2522 or visit www.lowel.com.