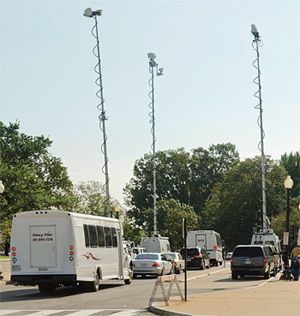 ALEXANDRIA, VA.—ENG and SNG trucks are an integral part of the broadcast news landscape in the U.S., and they continue to evolve in response to shifting technologies. And despite the fact that wireless broadband networks have been strengthened and made faster from coast to coast, it's still not up to the demands of a live news operation.

Three ENG trucks line up to report a story on the Washington Monument. Although cable channels have proliferated in the past 10 years, ENG/SNG truck vendors generally see the same types of customers that they have traditionally had.

The good news for truck builders and the equipment manufacturers who support them is that this is a good time to be supplying ENG/SNG vehicles.

"Historically, we've always been busiest in the 12 months prior to a presidential election and we are seeing early indications that this will hold true again," Vines said.

The 2012 election might be heating up things at TV stations and networks, but the continuing tough economy has kept a lid on capital budgets and every expenditure is watched carefully. That has led many ENG/SNG truck operators to squeeze more out of their existing trucks.

"We are seeing far more maintenance being done on aging equipment than in the past," Vines said. "There seems to be a lot of folks simply trying to keep their equipment working through the economic storm."

"We are seeing a new business model evolve with satellite systems whereby the antenna automatically locates the same one or two satellites on a regular basis," Vines said. "This ultimately could eliminate the need for a star-gazing truck operator and his spectrum analyzer and compass."

Other than modest changes to incorporate automated dish pointing systems, the gear inside the trucks seems to be more or less the same as previous generations of newsgathering vehicles. Vines said that there is a demand for Internet connectivity in the trucks but he doesn't see it used for live news feeds or even the IFB connection.

"There seems to be plenty of research using the Internet to backhaul signals, yet latency is the elephant in the room," he said. "Some methods look 'acceptable' with video resolution but the moment that the anchor and reporter start talking, the delay is far too distracting to the viewer. Same thing with IFB—most folks use tried-and-true methods, since IFB is critical and they want to use what they know will work."

There's not a lot of space in ENG/SNG trucks, so any gear that gets installed must be compact and it must perform a necessary function. Anything bolted into the truck has to be rugged and reliable.

Panasonic's P2 recorders and drives often get used in live feed trucks, since they have no moving parts and are durable. A popular model for live trucks is the Panasonic AG-HPD24 P2 recorder, which has a half-rack width design for easy installation.

Satellite trucks often have some minimal production capability, including switchers and monitors. A number of companies make small switchers for this application, including the CrossOver and Carbonite Series from Ross Video.

"CrossOver and Carbonite switchers both share compact rack frames (2RU) that are perfect for the very limited space available in this type of vehicle and they provide the 'big switcher' features that broadcasters are very familiar with," said Nigel Spratling, marketing product manager for Ross Video. "Our NK routing systems are also compact and tremendous value for money, and both these products are incredibly rugged and are highly reliable in the rigorous truck environment."

Mobile production is an active part of the industry for Ross Video.

"We have experienced a small amount of market growth in equipment sales in 2011, specifically for ENG/SNG trucks, although nowhere near the huge increases that we are seeing in production vehicles and studios," Spratling said.

Miranda Technologies has a range of signal processing, routing and monitoring products that are popular for newsgathering and uplink trucks, including the nVision compact CQX 16-input "clean-and-quiet" router. With a built-in buffer for each input, the CQX provides glitch-free switching among non-synchronous sources. Miranda's extensive line of signal conversion products is also frequently used in ENG/SNG trucks to convert among audio and video formats.

Grass Valley has both small switchers and conversion products that work well in a live news environment, including the Acappella small-matrix switcher. The Acappella can put a 16x16 matrix in a 1RU frame, and it supports HD video at data rates up to 1.5 Gbps, as well as a variety of audio formats.

TEC’s SNG Sprinter truck has a spacious cabin to accommodate larger crews for election year coverage. Accelerated Media Technologies in Auburn, Mass., has built ENG/SNG trucks for stations across the country. One of its recommended truck solutions is the Expedition CCV, which was designed in conjunction with the Ford Motor Company to address the growing demand for heavy-duty SUV based ENG/SNG and first-responder vehicles.

With a full-load of newsgathering equipment, the Expedition CCV weighs less than 7,000 pounds and inludes comfortable seating for four passengers. The vehicle can support masts up to 52 feet as well as a 1.8-meter satellite antenna, and has a rack design that allows entry from either side of the vehicle with no obstructions.

TEC's Vines recommends that a station consider a "mixed bag" of truck designs in order to provide the most efficient live news coverage.

"Keep a satellite truck (of some kind) in operation or downsize your sat system onto a smaller vehicle to retain your SNG capability, then keep some E-350 type vans in your fleet with tall masts since you will need those for some longer microwave remotes," he said. "If you are looking for more coverage at a low price point, then consider a new design like Ford Transit Connect that can give you live shots within 15-20 miles using a 20-ft mast and COFDM microwave."

Improved maintenance on older trucks and a renewed training effort will pay off as technology continues to evolve and the economy remains questionable.

"This is a great way to keep your fleet safely rolling while keeping your eye on the next wave of ENG technology," Vines said.

Bob Kovacs is a television engineer and video producer. He can be reached at bob@bobkovacs.com.