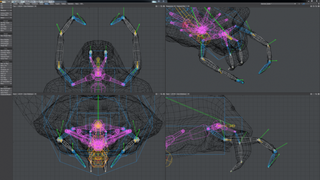 A new modular instant-rigging system that can be used to quickly rig a simple biped or quadruped for animation in Modeler without the need for specialized rigging tools. It offers modular rig presets that consist of skeletal parts such as spines, wings, arms, legs, hands and feet. Complete rigs for biped and quadrupeds can easily be customized using Genoma.

Bullet now includes soft-body dynamics for effects such as cloth, rubber, jelly or other deforming properties. Bullet meshes are also now reactive to bone deformations and wind forces can also be added for rippling effects.

A specialized particle system that allows items to move in very organic ways, Flocking offers new prey and predator behaviors that allow flocks to chase other flocks or have flocking agents seek out and chase the closest prey. Neutral flocks do not chase or chase but still affect other agents for collision avoidance. Other new features include Plane, Pursuit and Arrive directors and the addition of node controls.

A new GoAE button allows you to select elements in a scene and see them in Adobe After Effects — including animation, lights and camera setting. Changes can be made using Camera Tracker in After Effects before returning to Lightwave. GoZ technology for Pixologic’s ZBrush allows you to send models to and from LightWave with automatic node flows for textures and normal maps. ZBrush styling tools can also be imported to LightWave and attached to objects.