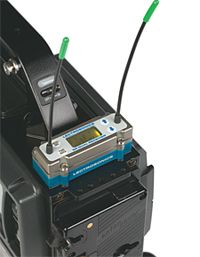 If you've noticed that stock market prices for manufacturers of hook and loop fasteners and G-tape have been sinking, it may that during the past five years a lot of cameras are hitting the market with built-in slots to accept wireless receivers. After spending due time listening to its user base for features, Lectrosonics has brought its digital hybrid SR (slot receiver) to the table in numerous configurations.

The SR is the standard model with a variety of options for output termination at the bottom of the case. Other models include the SRA, which has detachable antennae. Not a bad idea if you have to squeeze the camera and receiver into a snug transport case, or need other antennae solutions. The SRA5P brings both channels out to a TA5 on the top edge of the case.

There are two adapter kits specifically designed for camera slots. The Sony adapter kit—SRSNY—includes a mounting bezel that secures the receiver at the mouth of the slot and a DB-15 bottom panel connector for power and audio connections. The SRUNI adapter kit for Panasonic and Ikegami cameras is similar, but uses a DB-25 connector.

The Lectrosonics SR Series Dual Channel Slot Mount Receiver For facility or bag use there are two output plate options that mount to the bottom of the receiver. One plate provides three hardwired, unterminated six-foot cables. One of these is for for power and the other two are for balanced audio. The other plate has two TA3 jacks for audio and a six-foot power cable with locking connector. There's even a two channel solution for cameras that only take one channel of audio in the slot.

If your camera has no slot, this is not a problem. The battery sled adapter houses the receiver and provides a pair of TA3 outputs and an external power jack. It uses both L and M type camera batteries and these batteries are disconnected when an external power plug is inserted into the sled power jack. Lectrosonics also offers the SRSLEEVE aluminum sleeve mount, the SRHARDWARE cold foot adapter (including right angle bracket) and RATPAC 5-pin, right angle adapter cable.

The SR manual is well written with a full display of all menus. I was able to get the receiver and transmitters up without consulting the manual. In MIXMODE you can choose MIXBOTH, bringing both tracks out to both outputs for dual mono. MIXTO 1 mixes both channels and sends them to output 1. MIXTO 2 mixes both channels and routes them to output 2. DIRECT keeps the channels separated. MIXTRIM allows each output to be attenuated in 1 dB increments to a maximum of 20 dB.

The TEXTBATT screen has six sub choices that can be assigned for precise battery level monitoring. Accessing the PHASE screen allows the reversing of polarity of each channel, should the wiring of a mic cause a cancellation problem. Lectrosonics' standard SmtNR noise reduction is also built in to the SR receiver. For "deep" users, there's a shortcut that copies the settings of one receiver to the other with a simple button push combination.

The SR offers 10 frequency blocks, each 25.5 MHz wide and each with 256 frequencies. The manual shows how best to coordinate frequencies to minimize IM distortion problems. Finding two frequencies with the onboard graphic scanner is relatively easy and you can zoom in to find the exact numbers. Move the cursor to the proper frequency and choose it and you're done.

If you know the Lectrosonics line, the SR is sort of a marriage of the technology in their UCR 401 digital hybrid and Venue. One of the engineering challenges was getting two receivers in the same case without causing interference and loss or range or distortion. That required heavy shielding, double enclosures, critical component choice and choosing IM frequencies that don't beat.

Although the SR does not have a tracking front end or true diversity in stereo mode, this digital hybrid receiver does offer SmartDiversity. The algorithm analyzes both the incoming RF level and the rate of change in RF level to determine the optimum timing for phase switching and the optimum antenna phase. The system also employs "opportunistic switching" to analyze and latch the phase in the best position during brief squelch activity.

The receiver also employs Ratio Diversity. This blends the audio outputs of both receivers to produce a single audio output. A panning circuit blends more signal from the receiver with the stronger RF signal over a wide RF level range to anticipate and eliminate dropouts long before they occur. When a good RF signal is present at both receivers, and the audio is blended equally, the signal to noise ratio is increased by 3 dB.

Panasonic's Jan Crittenden was kind enough to send me one of the company's AG-HPX300 cameras to use in connection with the evaluation of the Lectrosonics SR. After removing the screws and cover plate on the top of the camera, I looked in and saw the DB-25 connector. Knowing that this camera was being sent to me, Lectrosonics sent the proper hardware, but somehow left out a few of the screws that are needed to tightly hold held the receiver tightly in place. By the time the screws showed up a day later, I'd already powered up the camera and receiver. The Lectrosonics receiver takes power from the camera battery, and the powering circuit in the SR receiver is "smart." If you turn the camera off with the receiver powered up, it also turns off, but it will power up when you turn the camera back on. Simple things like this make the SR even more attractive. Lectrosonics also sent SM and SMQ body pack transmitters and their stock lav mics.

Contact
Lectrosonics | 800-821-1121 | www.lectrosonics.com The Lectrosonics SR manual is well written and includes a full display of all menus. However, I was able to get the receiver and transmitters up and running without consulting the manual.

Gordon Moore at Lectrosonics made sure to ask where the camera and receiver would be used before shipping the wireless unit, and the block he sent worked well here in Baltimore. The receiver even has a feature for sending tone. I adjusted the gain for -20. Setting levels on the HPX300 was trickier because I had no camera manual and the online manual I found didn't really go into great detail as to where -20 was located on its metering. Eventually, and through a bit of trial and error, I got a setting that seemed to work.

With a wireless receiver on the camera, who's going to monitor the audio? Presumably the shooter. In this respect the HPX300 is less than cooperative. The eye piece is only adjustable horizontally. It does not swivel up or down. Even with my low profile Sony MDR7506 headphones on, I couldn't get my head to line up with the eyepiece. The right headphone cup was in the way and kept knocking the camera body. You'll really need in-ear phones if you want to listen while shoulder shooting. On a tripod, however, the swing-out LCD viewfinder is really quite nice.

The SR receiver integrated very well with the camera and continued to operate nicely. For my range tests, I used the Lectrosonics' 100 mW SM and 250 mW SMQ body pack transmitters, with each routed to a separate camera input. I went a good 140 yards with no breakup with the transmitters in free space. The SM began to sputter a bit past that and the SMQ gave up about 15 yards beyond the SM.

Back in the quiet of the studio I heard some system noise, but no companding artifacts. The larger diaphragms of the M152 lavs that Lectrosonics sells do a good job. They aren't very bright, (or the frequency response of the transmitters and/or receiver have been tailored). If you need to bury the mics, you may need a mic with more top end. And, of course, lavs with smaller diaphragms will be noisier.

With the SR stereo receiver, Lectrosonics continues its legacy of making solid gear with thoughtful, well-designed accessories and options that work.

Ty Ford hears things most people don't. He may be reached atwww.tyford.com.