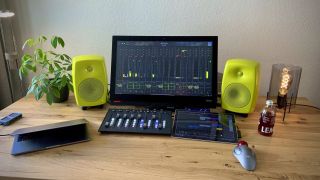 RASTATT, Germany—Broadcasters and the vendors they rely upon continue to find new ways to overcome the workflow challenges created by lockdowns and work-from-home orders.

The latest is German IP broadcast and audio technology specialist Lawo, which today announced that its mc²-series audio production consoles and surface-less operations, including mc² Micro Core, can be controlled remotely from anywhere with an internet connection, even using a smartphone as a 4G hotspot.

During its Lawo Lounge weekly webinar series, the company showed how sound engineers can control a broadcaster’s audio production environment from nearly anywhere via the company’s Mix Kitchen.

The Lawo Mix Kitchen is a long-term solution for any scenario in which physical access to the broadcast center is cumbersome or simply impossible. Mix Kitchen only requires slight configuration adaptions—using supplied templates—to enable the Nova73 console core on a broadcaster’s premises to be remote controlled, the company said.

The most important ingredient of the setup is remote fader control using a Mackie HUI-compatible fader panel, it said.

Off-the-shelf tools, a laptop and Lawo’s mxGUI software, which is included with all mc²-series mixers, allow the engineer in charge to take control of the Lawo hardware at the broadcast center or hub, the company said.