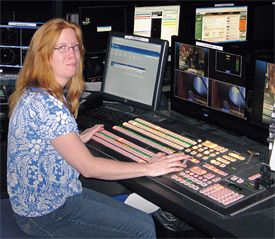 We began researching a move to HD last year and realized that we were also in need of a fresh broadcasting technology in order to keep us competitive for marketplace leadership. We needed to replace our early 1990’s Ross Video analog production switcher with newer digital technology.

We like to build relationships and work with vendors and integrators on a holistic basis, and chose Illinois-based Roscor Corp. as our as our systems integrator. They assisted us during our modernization project and helped us to identify Ross Video as a vendor.

We selected the Ross Vision 2M QMD multidefinition production switcher from Ross to replace our analog model. The Vision’s custom controls, squeeze and tease capability and SmartConversion features, along with its many options, were huge selling points.

The SmartConversion feature especially has played a big part in helping us to reduce conversion gear costs, as it allows us to mix standard- and high-definition video sources simultaneously and automatically.

There’s no question that our new Ross Vision switcher allows us to produce much richer and technically more robust newscasts. Another bonus was the switcher’s easy installation.

While we were aware that there was clearly an extensive technology shift between the earlier Ross analog production switcher we’d been using and the new Vision, the philosophy behind Ross switchers has remained the same, and this played a large role in easing our transition.

From the pre-sale phase through installation and operator training, the Ross team in effect became the KWWL team. The Ross Video people worked with us at every step of the transition project and walked us through every detail with hands-on product familiarization. Our successful implementation was as important to Ross Video as it was to us, as we both wanted to make sure that our news production looked as good as possible.

Any shift in technology is going to involve some challenges and a period of adjustment. However, I can truthfully state that there were really no unexpected challenges thrown at us in connection with the installation and cutover to the Ross Vision switcher. It is a great performer and has immensely improved our station’s newscast “look.” We attribute this to Ross’s XPression character generator, the switcher’s motion graphics system and also to the OverDrive automated production control system.

With the Ross Vision switcher now on line, KWWL television has much more production capability and no limitations. We have achieved our goal of moving into local high-definition operations, making us the first to do so in this market.

Kim Leer is station manager at KWWL television, and has more than 23 years of broadcast experience. She may be contacted atkleer@kwwl.com.

For additional information, contact Ross Video at 613-652-4886 or visitwww.rossvideo.com.