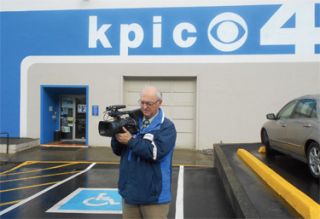 ROSEBURG, ORE.: KPIC is a Fisher Communications property and the CBS affiliate here. We have a small news operation, but manage to cover a lot of territory—13,500 square miles, extending from the Pacific Ocean east to the summit of the Cascades, and reaching more than 100,000 viewers.

The station has three videographers, with each of us shooting two to three stories per day on average. Our main camera is Panasonic's new AG-HPX250 P2 HD handheld model, the company's first such product with 10-bit, full HD AVC-Intra recording. We also have Panasonic's AG-HPX170 P2 HD handheld and an HDV camcorder for news operations. Our production department has been assigned a second HPX250 that's used for commercial production work and occasional long-form programs.

The three of us in the news operation produce about 15 hours of local news each week. I shoot exclusively with the HPX250 and cover events that range from sports to courtroom trials and government meetings to breaking news.

In addition to shooting editing and writing as many as three stories a day, I also anchor three daily newscasts. (My colleagues say I've been working as a VJ long before the term was coined.)

We're continuing to shoot our news footage in 4:3 aspect ratio, standard-definition video, but will soon be converting to high-definition operations. I have no doubt that the Panasonic HPX250/HPX170 camera will be able to handle that just as easily.

None of us had ever worked with Panasonic cameras before; however, after looking at the competition, we chose the HPX250 based on its reasonable price and the fact that it had all the features we needed in our small news department, including a color monitor and plenty of recording capacity. The new camcorder's small size, low weight (just 5.5 pounds), 1/3-inch 3-MOS imagers, wide zoom ratio lens, optical stabilization system and long-lasting batteries were also big selling points.

CAMERA IS IDEAL FOR NEWS

As we've gotten used to the camera, we've discovered some more features that have proven quite helpful in our work. One of these is the "Last Clip Delete" function that allows you to get rid of a lot of clips that you won't be using. It keeps you from filling up your memory cards and makes it a lot easier to edit content when you get back to the newsroom.

The auto focus is another feature that's handy in most shooting situations. Also, the color monitor provided allows you to see if your video is white-balanced and if the lighting is properly adjusted.

When we head back to the station, it's an easy matter to load our captured video into our Edius system to put things in order for newscasts. Once that's done, we load the material into our server and it's ready for quick play-to-air access.

We now have quite a bit of hands-on experience with the Panasonic HPX250 and I feel very confident in saying that this is the camera that is going to take us full-fledged into the realm of high-definition ENG without any compromises.

Dan Bain has been the news director at KPIC television since 1992, and supervises the station's news department. He may be contacted at bain@kpic.com.

For additional information, contact Panasonic at 877-803-8492 or visit www.panasonic.com/broadcast.