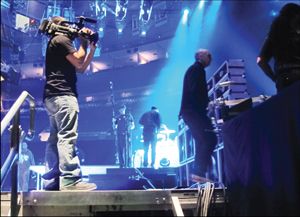 Ferro Productions uses their JVC GY-HM790 ProHD camcorder in a variety of high-profile projects. NEW YORK—Ferro Productions primarily handles production duties for television networks and production houses. Our specialties include high-profile live events and reality programming. Since our inception in 1993, we’ve pretty much stayed with products from one television equipment supplier. However, all of the new developments in digital technology prompted us to consider new options. While producing a series of celebrity interviews, I decided it was time to look for ways to improve our company’s overall workflow.

SIMPLIFY, SIMPLIFY!
Between the various recording formats encountered along the way, and the eventual move to tapeless acquisition, our operational complexity had gotten ridiculous. We knew that there had to be a better way to do things, but we also knew that we needed to be budget conscious.

Last fall when we began researching new cameras, our staff literally filled a whiteboard with requirements. Then we witnessed JVC’s GY-HM790 in action on the sideline during an NFL game. I decided to test it on location while covering the New York Giants during their playoff run and their Super Bowl victory festivities. We presented the new camera to our “B” and “C” camera operators for experimentation, and afterwards everyone said this was the camera they had been looking for.

We acquired our first GY-HM790 last December, and plan to purchase two additional units before the end of the year. Our camera operators love the unit and the images it produces are really great.

Recently, our company was hired to produce some behind-the-scenes footage of the Van Halen/Kool & the Gang tour, and this was captured exclusively with the GY-HM790 camera. We were so impressed with the image, ease of operation, and all-around superior engineering quality that we opted to leave our older camera gear at home.

SMALL IS GOOD IN SEVERAL WAYS
The shoulder-mount GY-HM790 model provides our shooters with professional features in a lightweight and compact package. We operate in a lot of highprofile areas, and we’ve found from long experience that when you’re walking around with bigger broadcast cameras, you’re likely to get more attention than you really need. The JVC GY-HM790 camera has the perfect balance between size and functionality.

Our production team has also quickly adjusted to capturing footage on inexpensive, non-proprietary SDHC cards. However, it’s still usually a chaotic environment when we’re doing location work, so we have developed our own system for keeping track of the storage cards by using color-coded Beta tape cases with foam inserts which are cut out to accept the cards.

JVC’s native Final Cut Pro recording has proven to be a big hit with our postproduction team. They tell us that they really love the workflow that comes along with the GY-HM790—there’s no more transcoding. The editors take the SDHC card and drag and drop the footage right into Final Cut Pro. This really saves everyone a mountain of time.

Joseph Scacciaferro established Ferro Productions in 1993. He may be contacted atjoe@ferroproductions.com.