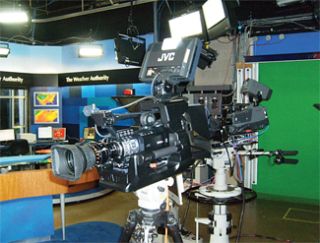 I've been working with broadcast television cameras since the days of the RCA TK-42, and have seen a lot of changes since that one was introduced.

JVC's GY -HM790 SD/HD Field/Studio Camera And the times are still changing. During the past few years, I've noticed that JVC'has been making an effort to grab their share of the studio camera market. Their latest offering is the GY-HM790, and when I heard about its release, I jumped at the opportunity to put a unit through its paces in a studio environment.

As an overview, the JVC GY-HM790 is a dual use camera/recorder. It's offered with a detachable 14X Canon KT14x4.4KRSJ HD lens with improved lateral and longitudinal chromatic aberration. The camera's 1/3-inch "T-mount" adaptor allows other 1/2-inch and 2/3-inch lenses to be used. Also by using the HZ-CA13U film lens adaptor, 16mm film camera lenses can be accommodated.

For imaging, the GY-HM790 uses three 1/3-inch progressive scan HD CCDs with JVC's new Adaptive Pixel Correlation Technique (APCT) and Triplex Off-Set Technology. After the image is captured, it can be directed sent to the HD SDI output of the camera, or may be output as ASI, with an optional module. For CCU operation, there's a 26-pin multicore adaptor, and also a fiber transport option. For HD recording, the selected format is encoded using Long GOP MPEG-2, with a data rate of up to 35 Mbps. For ease of connectivity with most major editing systems, MOV, MP4, and type 2 AVI files are provided.

For studio applications, there's an 8.4-inch high-resolution LCD viewfinder which mounts on the studio sled, and includes a large tally indicator and screen hood. For field use, the GY-HM790 features a 0.45-inch high-resolution LCOS viewfinder. The LCOS VF signal is SDI for optimum quality, and all standard information is displayed for the user. For file management and larger VF needs in the field, there's also a swing-out 4.3-inch LCD viewfinder.

The camera is powered from a 12 Volt DC source and draws approximately 27 Watts in field use. Fully outfitted for the field, the unit weighs about 8.5 pounds, and the studio configuration tips the scale at 26 pounds.

The GY-HM790 uses SDHC memory cards for recording and has two slots. Video outputs include analog composite/component, along with SDI and embedded audio. Audio inputs are available for two channels of balanced, (mic/line) audio, with phantom power if needed. There's provision for timecode in and out, and also a 1394 FireWire port and mini USB-B type 2.0 port.

Although the camera is equally at home in the studio or in the field, I elected not to test the full studio CCU configuration, as that would require much more space to describe than is available here. My plan was to get the GY-HM790 set up in our studio and just start shooting.

The camera arrived already mounted in its studio sled, and the viewfinder and battery pack/charger were in the case ready for use. I installed the unit on a Miller carbon tripod with a Vinten Vision 3 head and in just a few minutes had everything ready for evaluation.

I used the Anton/Bauer Gold Mount to power the unit, and fed the GY-HM790's 1080i video into an Evertz 2430DAC-HD converter to allow viewing on an Optiquest CRT monitor.

I found that the right side of the camera sled folded down for connector access, which is a really nice feature. As my station's existing studio cameras are equipped with Fujinon lenses, I had JVC ship the test unit with a Fujinon 17x lens. My basic plan was to place the studio cameras in "auto" mode, and do a side by side comparison with the JVC. Of course, the test would be a bit one-sided, as our studio cameras have 2/3-inch imagers. But who said life was fair.

For my first test, I brought out an EIA resolution chart and set it up with full studio lighting. I placed the JVC next to an existing studio camera and set filters the same. I then white-balanced both cameras. The cameras were both about 20 feet away from the chart and when I zoomed both in I was easily able to see more than the 800 lines of resolution.

Contact
JVC
800-582-5825
pro.jvc.com In doing an A/B test, I could not discern any differences between cameras on the test chart. I then panned over to the edge of the pattern and onto some black fabric that borders the test card. As it turned out, the fabric became a pretty fair resolution indicator.

While both cameras did an excellent job on the fabric, I could discern a tiny bit more detail with the 2/3-inch camera. The difference was minimal, but was indeed there.

Next, I panned both cameras over to our outdoor garden (which is reminiscent of an NAB Show camera exhibit), and caught the waterfall in full frame. Its motion looked natural on both cameras, and any image differences were essentially indiscernible. Colorimetry was very close and the video was crisp and clean out to the edges of the rame.

I suppose that no camera test would be complete without getting the lights in frame. I did just that, pointing the GY-HM790 directly into the studio lamps. There was a complete absence of any trailing or smearing.

I tested the camera for several weeks and found no real issues with it. For field evaluation, I asked a producer/shooter at the station to test drive the unit, and he was quite impressed with the feature set. We did note that the field viewfinder is a bit tricky to use with regard to eye placement—you've got to have it adjusted just right or you be "hunting" for the image. On the other hand, the studio viewfinder is big, and loaded with features. Like the rest of the system, it's a real keeper. It would be nice if the flip-out VF could be used in the studio for a spare, however the studio sled prevents its use when attached.

The GY-HM790 was faced-off against a camera costing several times more, and while there is a degree of difference in the performance, it's clear to me that JVC has created a real contender in today's market.