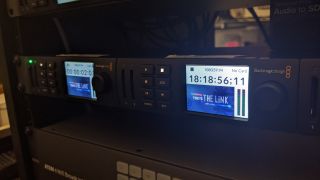 LOS ANGELES—For nearly a decade, Jukin Media has teamed up with entertainment, advertising and publishing professionals to develop shows, campaigns and stories utilizing the world’s most compelling user-generated videos. Jukin has produced more than 1,000 episodes of TV for networks in the United States and abroad, and hosts a library of more than 50,000 remarkable viral-style video clips it licenses out for use by thousands of media and entertainment companies across the globe.

Jukin Media is using a combination of Blackmagic Design gear for its latest entertainment venture, “TBD’s The Link.” TBD is a broadcast network that highlights the best of the internet, and the 13-episode, 30-minute show, hosted by Lorena Abreu, takes viewers on a hilarious viral video clip trip. “TBD’s The Link” airs Saturdays on TBD, and episodes are then uploaded to the network’s website (tbd.com).

Production for “TBD’s The Link” took place in one of the smaller studios at Jukin Media’s Los Angeles headquarters. We used one camera connected to a Blackmagic ATEM 4 M/E Broadcast Studio 4K switcher and also had a live audio mixer on stage feeding into the switcher and camera. The switcher’s SuperSource multi-layer engine was used for two different on-screen monitor orientations for vertical and horizontal clips.

We also used the switcher’s ATEM Advanced Chroma Keyers to our advantage when creating both our green screen feed and our key for the line cut and graphics on our virtual set. The ATEM 4 M/E Broadcast Studio 4K allowed us to use numerous high-quality transitions, and with its DVE, we could easily resize, rotate and scale our videos.

An ATEM 1 M/E Broadcast Panel controlled the ATEM 4 M/E Broadcast Studio 4K and allowed us to access the switcher’s macros, giving us full control to record and playback macros at the push of a button.

At the heart of the workflow sat a Smart Videohub 12G 40x40 router, which was fantastic as we had 10 monitors on set for the crew, as well as an additional monitor for when we had a live audience onsite. Connected to the Smart Videohub 12G 40x40, we had one camera source, two inputs per HyperDeck Studio Mini recorders for a total of four inputs and one input for the audio, which allowed us to hear the clips’ audio live on stage. In terms of output, we had four HyperDeck Studio Minis, five program outputs for monitors and one program output for remote monitoring of the live web stream.

Even though we didn’t use them all, we were glad to have the router’s 40 inputs and 40 outputs available. For example, we started with fewer inputs and outputs, but they expanded over time as the project progressed. We also used the Smart Videohub 12G 40x40’s built-in LCD to monitor during the show’s production and for troubleshooting because it allowed us to see the format of the video that was coming through.

Relying on Blackmagic Design for “TBD’s The Link” was a great decision for our team. We were able to control costs and every piece of gear worked seamlessly with each other. We look forward to using Blackmagic Design in our future productions.

Daniel Romero is a freelance union technical director with experience in broadcast engineering and a demonstrated history of working in the live television industry. For more info on Jukin Media, contact Mike Skogmo at mike.s@jukinmedia.com.